Image copyright EPA Image caption Mr Macron walked through the glacier on Thursday with scientists and ministers French President Emmanuel Macron has pledged to step up environmental protection policies, including with a new reserve around Mont Blanc amid concerns over tourism and pollution. Speaking at the foot of the country's highest mountain, he said 2020 would be a "decisive" year for the environment. Critics have often spoken of the rising number of tourists coming to Mont Blanc and the pollution they leave behind. Mr Macron also visited France's largest glacier that has shrunk dramatically. "What we see with this glacier melting is irrefutable proof of global warming," Mr Macron said in Chamonix after visiting the Mer de Glace. The 7.5 kilometre (4.7 mile) glacier lies on Mont Blanc. The president said the fight for biodiversity was "a fight for our own survival" and officially launched a new agency, the French Office of Biodiversity (OFB), which will monitor and restore the French environment. * * The Chamonix event comes a day after the government announced a host of new environmental measures. France will create a protected nature reserve around Mont Blanc - western Europe's highest peak - by the end of the year, with rules about the number of people who can visit the mountain, especially in the summer. Image copyright EPA Image caption Mer de Glace is France's largest glacier Ecology Minister Elisabeth Borne also announced on Wednesday that from July, civil servants will get an annual bonus of €200 (£168; $218) for sharing a car or cycling on their commute. The government will stop buying single-use plastics the same month. Ministers will be encouraged to use trains for non-emergency trips, and all ministerial cars will switch to electric or hybrid power - including an armoured hybrid vehicle for Mr Macron. The French president ate dinner at Mont Blanc on Wednesday alongside Ms Borne, Secretary of State Emmanuelle Wargon and a number of climate scientists. The delegation then visited the glacier on Thursday morning. Image copyright EPA Image caption It has shrunk dramatically in recent years The president's visit to the Alps comes after a nearby town mayor called for greater protection of the region last September. "Mr President, taking care of the forests in the Amazon is very good. Ignoring what is happening on Mont-Blanc and letting disrespect continue is not tolerable," the letter written by the mayor of Saint-Gervais said. , pledging "concrete measures" to protect the mountain. * * The mayor's letter said "les hurluberlus" - loosely translated as "oddballs" - were polluting the mountain. It came after in August. Matthew Disney tried to climb the peak with the machine, but was forced to abandon it in the weather. Image copyright Matthew Disney Image caption Mr Disney says he fully intends to retrieve the machine He later pledged to retrieve it himself after the mayor said it would need to be picked up by helicopter. in 2018 over concerns about tourism and pollution. You may also be interested in: Media playback is unsupported on your device Media captionWhy is the "doomsday glacier" melting so rapidly? 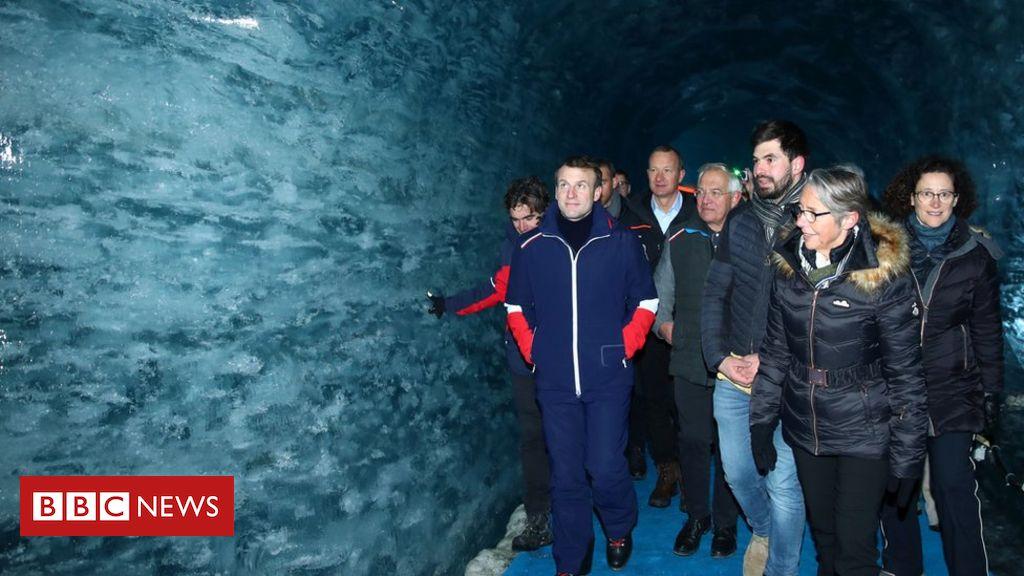