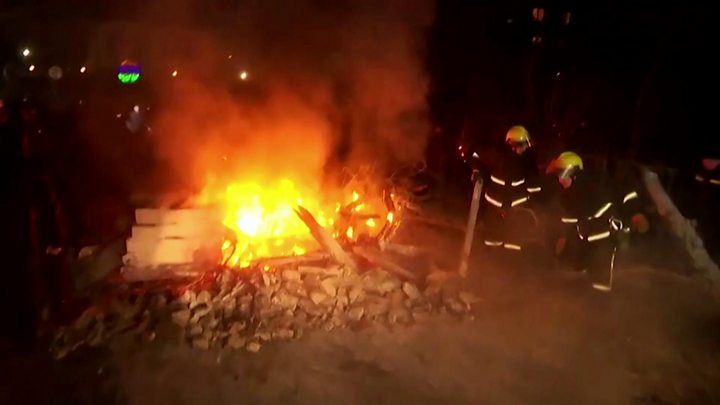 Dozens of protesters in a Ukrainian town have attacked buses carrying evacuees from coronavirus-hit China.

The evacuees were brought to a health spa in Novi Sanzhary, in the central Poltava region, where they will be held in quarantine for 14 days.

Ukraine's security service (SBU) said a fake email claiming to be from the health ministry falsely said some evacuees had contracted the virus.

Ukraine has no confirmed cases of the new coronavirus, which originated last year in China's Hubei province.

To show solidarity with the evacuees, Ukraine's Health Minister Zoryana Skaletska on Friday joined them in quarantine and said she would run her ministry by Skype and phone.

"I hope that my presence there will calm those in Novi Sanzhary, as well as the rest of the country," she wrote in a Facebook post (in Ukrainian).

What happened in Novy Sanzhary?

On Thursday, 45 Ukrainians and 27 foreign nationals were flown from Wuhan in China, the epicentre of the deadly outbreak, to Kharkiv in eastern Ukraine.

Six buses then drove them to the health spa in Novi Sanzhary, where they were met by demonstrators lighting bonfires and hurling stones.

Armoured personnel carriers were seen deployed in the small town.

The country's health ministry said none of the passengers were sick.

Ukraine's diplomatic mission added that three Ukrainians and a resident of Kazakhstan had been left behind in China, because they had reported having a fever. Image copyright Reuters Image caption Prime Minister Oleksiy Honcharuk (C), Interior Minister Arsen Avakov (second L) and Health Minister Zoryana Skaletska (R) travelled to the town to try to calm tensions

In footage published by local media, Mr Avakov was seen telling the protesters: "We are not talking about infected people, we are talking about healthy people."

One person then replied: "So far."

More on the outbreak

What did President Zelensky say?

In a statement, President Zelensky urged Ukrainians to show compassion and refrain from protesting.

"Most of the passengers are people under 30. They are almost like children to many of us," he said.

"But there is another danger that I would like to mention. The danger of forgetting that we are all human and we are all Ukrainians. Each of us - including those who ended up in Wuhan during the epidemic."

And on Friday, the president compared Thursday's clashes with the Europe in the Middle Ages.

The vast majority of the cases and deaths have been in China. 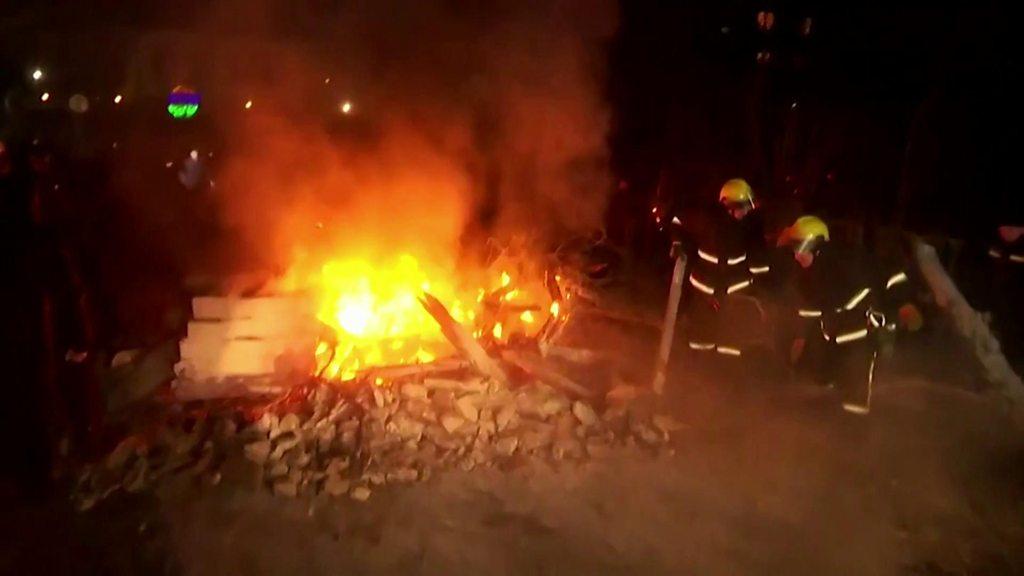