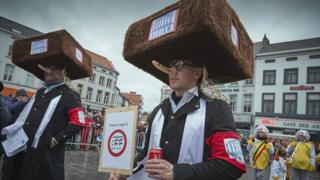 Israel, Jewish groups and Belgian Prime Minister Sophie Wilmès were among many who strongly condemned the costumes in Sunday's parade in Aalst.

Some critics said likening Jews to ants was similar to Nazi anti-Semitism, which persecuted Jews as "vermin".

The Aalst mayor's spokesman told the BBC "it's our humour... just fun".

Peter Van den Bossche said "there isn't a movement behind it" and "we don't wish harm to anyone".

"It's our parade, our humour, people can do whatever they want," he said. "It's a weekend of freedom of speech." Image copyright AFP Image caption Critics called this mockery of Orthodox Jews and the Western Wall anti-Semitic

Aalst lies 31km (19 miles) northwest of Brussels - the heart of the EU - and is run by the New Flemish Alliance (N-VA), a nationalist party pushing for Flanders independence.

The city drew much criticism for parading caricature Jews last year - so much so that it was dropped from Unesco's cultural heritage list in December. After the outcry, Aalst itself had asked to be taken off the list.

Unesco - the UN's educational and cultural agency - was also satirised in the parade on Sunday.

There were also people parading in Nazi SS uniform - despite the fact that, in World War Two, the Nazis deported about 25,000 Jews from occupied Belgium to the Auschwitz death camp, where most were murdered. Image copyright Reuters Image caption Aalst mocks Brexit, with a float featuring Boris Johnson and the Queen

In Sunday's parade some caricature Jews posed with a mock-up of the Western Wall - often called Jerusalem's Wailing Wall, a holy site for Jews. It was labelled "the wailing ant", in Dutch "de klaugmier". The Dutch for "wailing wall" is "klaagmuur".

"This doesn't encourage anti-Semitism; the reaction last year was over the top," Mr Van den Bossche said. "Two hundred percent it's not anti-Semitic." Image copyright EVN/RTBF Image caption Mock-Nazis parading in Aalst - in a country that was terrorised by the Nazis

He underlined that the carnival themes were based on news events as seen in Aalst - hence the mockery of Unesco.

When asked about the Nazi characters in Sunday's carnival, he said: "Those symbols - normally we don't accept that, we condemn that.

"We say: what can we do about it? Put people in prison? No." 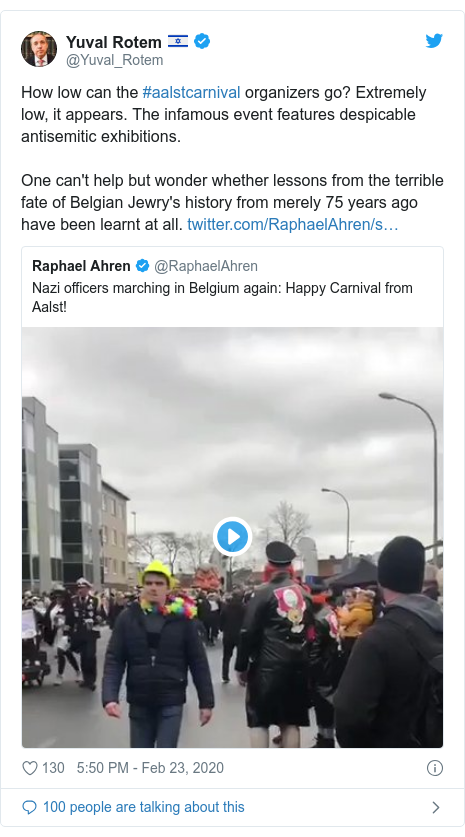 Belgian PM Sophie Wilmès said the pretend Jews in the Aalst parade "harm our values and our country's reputation".

"The use of stereotypes stigmatising communities and groups based on their origins leads to divisions and endangers our togetherness," she said.

Joël Rubinfeld, head of the Belgian League against anti-Semitism, said: "It is sad, deplorable, shameful that 50 persons are tainting an entire carnival, a popular celebration. It gives a catastrophic image of the city of Aalst and also of our country abroad." 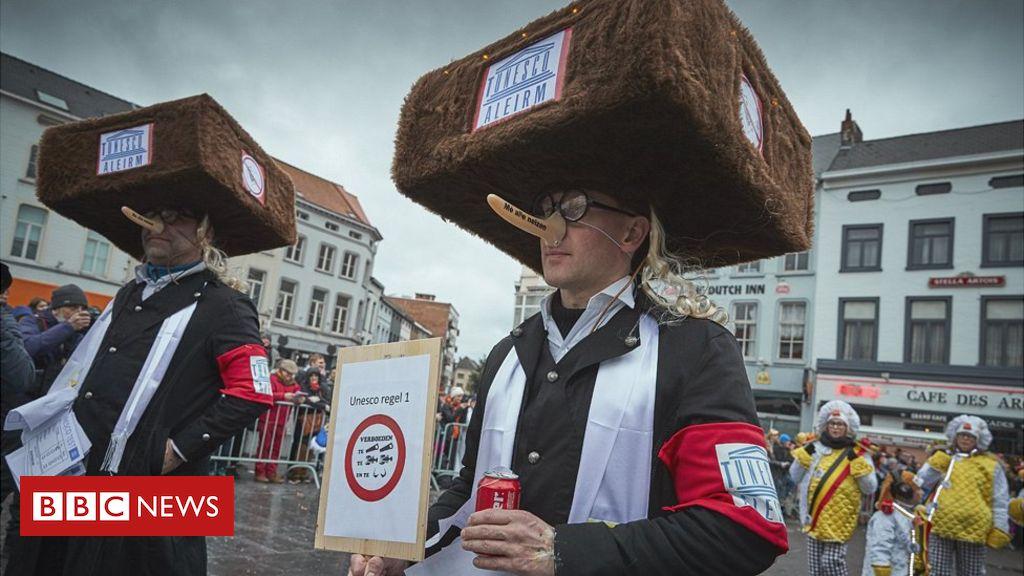