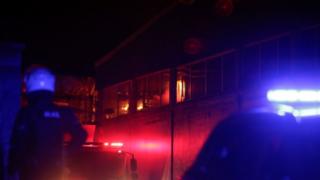 A fire has ripped through a refugee shelter on the Greek island of Lesbos as tensions over a surge in migration from Turkey continue to rise.

Flames engulfed the One Happy Family centre, near the island's capital Mitilini, on Saturday.

It is not clear how the fire started. No causalities have been reported.

In recent days, there has been hostility towards migrants on Lesbos after an increase in arrivals from Turkey.

Hundreds of migrants have attempted to reach the island since Turkish President Recep Tayyip Erdogan said last week he was "opening the doors" for refugees to enter Europe.

But on Saturday, Mr Erdogan partially reversed his position. He ordered the Turkish coastguard to stop migrants from crossing the Aegean Sea to Greece because it is unsafe to do so. Image copyright Reuters Image caption Firefighters have been tackling the blaze at the One Happy Family community centre

The EU has accused Mr Erdogan of using migrants for political purposes. It insists its doors are "closed".

Meanwhile, clashes have again erupted at the land border between Greece and Turkey.

There appears to have been no change in Turkey's position with regard to letting migrants try to enter Greece via this route. 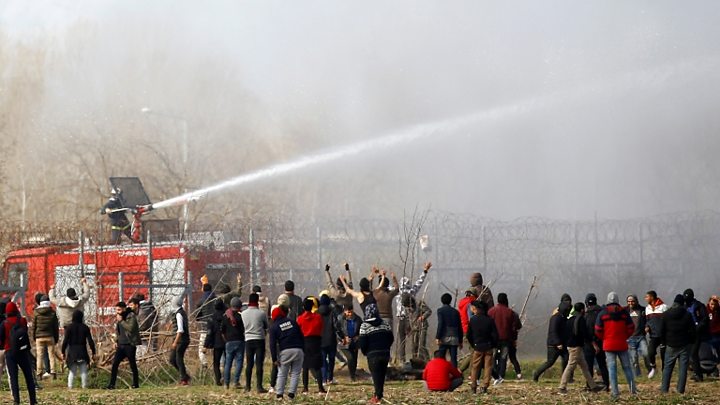 On Saturday, Greek police fired tear gas at crowds at the border crossing at Kastanies, who responded by throwing stones and shouting "open the gates", according to the AFP news agency.

"Accommodation and benefits for those granted asylum will be interrupted within a month. From then on, they will have to work for a living," the minister said.

"This makes our country a less attractive destination for migration flows."

In 2016, a deal was reached whereby Turkey would stop allowing migrants to reach the EU in return for funds from the bloc to help it manage the huge numbers of refugees it hosts.

But since then, tensions between the EU and Turkey have flared on various issues. In recent weeks, a fierce onslaught by Syrian forces and their Russian backers on Idlib, the last province held by Syrian rebels, has led to clashes with Turkey, which supports some rebel groups.

Turkey already hosts some 3.7m Syrians but the conflict in Idlib has led to nearly a million more fleeing to its southern border.

Although the EU promised billions more euros in aid, Turkey was unimpressed and last week decided to open its borders with Greece and even bussed migrants close to the north-western border.

Greece said that the migrants were being "manipulated as pawns" by Turkey in an attempt to exert diplomatic pressure.

It has halted for a month all asylum claims from migrants who enter Greece illegally, and taken aggressive measures to deter them from entering via both land and sea.

In a 24-hour period to Saturday morning, more than 1,200 migrants attempted to cross the land border, most from Afghanistan and Pakistan, an official source told Reuters news agency. 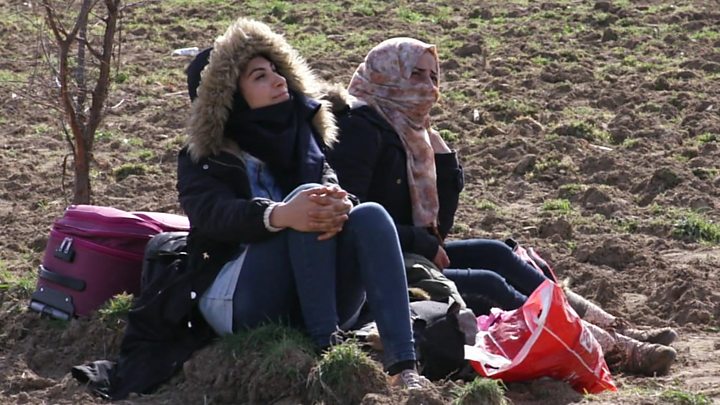 The BBC has encountered members of self-styled militias who carry out night-time armed patrols in Greek border towns looking for migrants.

"There are such militia along the entire region," said Yannis Laskarakis, a newspaper publisher in the city of Alexandroupoli who has received death threats for speaking out against armed vigilantes.

"We have seen them with our own eyes, arresting migrants, treating them badly and if someone dares to help them, he has the same fate." 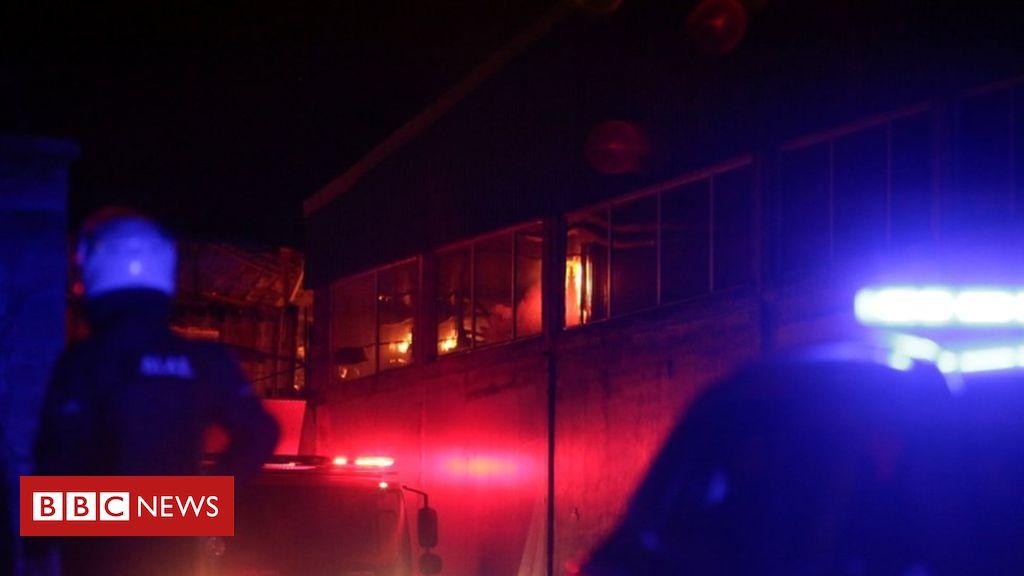