Real winter: Baikal as a place of rest from global warming

After leaving Moscow for five time zones, we found out what sokui is, how thick the ice is on lake Baikal in March, and how to make a police u-turn

The almost complete absence of snow and an excessively mild winter divided residents of the European part of Russia into two camps: the heat-loving were happy and hid warm clothes on the mezzanine, and supporters of winter fun like playing snowballs scolded global warming along with Greta Thunberg. Although the real Russian winter has not disappeared-you just had to decide and leave the Moscow ring road. We chose a place of strength by going to lake Baikal in the Lexus Adventure Camp.

A memo from the camp organizers specifically noted the need to take "a set of wool thermal underwear", "outerwear at -20 °C" and sunscreen. It is immediately clear what adventures await on the way, the final destination of which was declared the island of Olkhon. The goal is to meet with winter at least in early March, take crazy photos and test yourself and Lexus at low temperatures. As you can see, everything was successful. Lexus LX flagship SUV Updated Lexus GX SUV Updated Lexus RX crossover Urban crossover Lexus NX

The Lexus LX holds the most people during the trip --- it can accommodate up to eight people. Stability of movement on the road and on ice was provided by the Torsen high-friction differential and the Multi-Terrain Select driving mode selection system.

The GX is one of the most reliable and safe off-road vehicles in the world. It is equipped with ten airbags and the Lexus Safety System+. The GX has recently undergone a facelift, with its signature spindly grille and three-beam led headlights.

Lexus RX is equipped with the world's first adaptive high-beam control system such as BladeScan and the new-generation Lexus Safety System+, which helps prevent accidents.

However, the temperature of -20 °C and should not have had any effect on the Lexus cars, which we used to get to Olkhon. The entire range of SUVs and crossovers has already been tested in the most extreme conditions-from the heat of the Middle East to the Arctic cold. So, one of the most severe test cycles is taking place at the winter test site in the city of Timmins in the canadian province of Ontario, where global warming has not yet reached, winter temperatures there still exceed -40 °C.

The Lexus route ran past Baikal grottos covered with statues-frozen splashes of water, turned on the island of Ogoy, where pilgrims come to the Buddhist Stupa of Enlightenment, and passed through strong ice and off-road Olkhon. There were tons of snow and ice around --- for those who miss them.

As part of the Lexus Adventure Camp, the Russian drift champion Nikita Shikov showed off the wonders of driving on ice. Participants of the camp trained to hold the car in difficult conditions of lack of traction, even trying to make the famous "police u-turn". 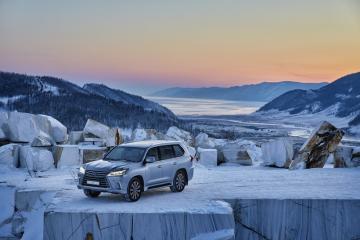