65th series about the round-the-world journey of the Muscovite Irina Sidorenko and her dog Greta: a snow storm over a mountain gorge, a workshop of a hereditary Potter and a dangerous breakdown on the highway

A former employee of a Moscow luxury real estate Agency decided to go around the world in a car and in the company of a dog after several training trips. You can follow her movements in real time in the blog Around the world . In the previous series Irina waited out the rockfall on the pass, visited the mountain lake Valasht and shared tips on how to travel with a dog by car in the Islamic country.

The Chalus highway itself is complex, with many tunnels and bridges. It is not wide, and most of it runs through the gorge. It's a little creepy when you drive under the overhanging rocks.

The weather in the mountains is changeable. When I left lake Valash, a strong wind began to blow. So much so that I didn't have the strength to open the car door to get out. The higher the track went into the mountains, the stronger the gusts. Temperature difference from +20 near the lake to -3 above the gorge. And then it started to rain, and it turned to snow. The real snowstorm lasted almost all day. The mountain route is not adapted to move vehicles at high speeds, and in such weather conditions I go 20 km/h. All drivers were tactful, no one signaled the blonde-slow-moving, went around carefully and without moralizing. I eat slowly, peering into the snow, thank them for their patience, and remember my first extreme case, when my Elantra saved me. The Chalus-Teheran highway passes through the gorge, through the thickness of the Alborz mountain chain

The Chalus-Teheran highway passes through the gorge, through the thickness of the Alborz mountain chain

Exactly three years ago. My driving experience is less than a month. this is the first time I went on a long trip, about 400 km from Moscow. On the way back, a snowstorm started. The road is not visible, the snow is a wall. I hit the edge of the shoulder with my wheel, and the car spun on the slippery road. A few seconds, and it seems like an eternity has passed, all in slow motion. I had time to think that my life was now over, and I had already said goodbye to her. I don't know what worked then ---the maneuverability of the car, the intuitive driving ability, the guardian angel, the empty road by chance, or all of this combined. All I remember is that I'm flat on my chest against the steering wheel, twisting it on a hunch, and my head is ringing: who's honking? who's that honking? I was blown to the side of the road, and the Elantra stalled in a snowdrift. Three men jumped out of a passing car and ran toward me. It's okay, I was just really scared. Turn on the emergency light so that you can be seen. I sat there with the emergency lights on for about an hour before I could put the key in the ignition.

I told very few people about this story, because even I was afraid to remember it. But this is one of the reasons why I went around the world in this car. Valley in the province Mazandaran

I have repaired my car countless times, yet we have already driven half of Russia, Europe, Africa, and the middle East together. So in Iran, my combat friend proved her reliability. Someone yanked my arm, and I pulled over to the side of the road, not in the most comfortable place. But this was the only area with dry grass where Greta could run with minimal damage to the cleanliness of the cabin. Before I could get up to speed after stopping, the engine stalled. He had been deaf before, complaining about the African off-road. And I have already learned to identify the cause of his whims. But this time it stalled in a different way. Did the timing belt fly? This was what I was most afraid of, and I was already preparing to accept a terrible verdict for the engine. I rolled to the side of the road and tried to turn on the ignition. The starter shows signs of life, the panel is lit by all devices. The engine is silent.

In order not to injure yourself immediately with troubles, I decided to look for other reasons on the Internet. And all of a sudden? While I was crawling under the car in search of a leak of oil, gasoline, or something else, I didn't notice how the car's tow truck stopped nearby. He was driving by. The driver said something to me in Farsi, and I realized that he was ready to take me to the service. I show him the tow rope, and he looks at me like I'm a blonde: I'm a tow truck! And drove to the nearest town Jalabad.

The diagnosis was confirmed. The timing belt broke. Fortunately, the engine was not damaged. I was lucky that I stopped in time on the side of the road, did not have time to pick up speed after the stop, and I had a spare belt with me. I was lucky that my friend Sasha Prudnikov was not too lazy six months before this incident, found it and other belts for my Elantra, bought it and gave it to me with a gift. I was lucky that Eugene Shvets, who was traveling in Africa at this time, agreed to bring the belts and did not spare the time of his short vacation to pass them to me.

I measure the engine's compression several times, listen to it all the time, find no reason to worry, and go to explore the Eastern part of Iran.

City of potters Lalejin. Ceramic vessels of all shapes and clay figures are everywhere you look. Pots and vases dot the streets. Starting from the Stella at the entrance to the city, ending with the ancient basement workshops where the craft was passed down from generation to generation, creating a dynasty of potters of Lalejina.

Here on the territory of the factory, a truck is loaded with ceramic dishes, carefully stacked it mixed with straw. And it takes up little space, and protects from blows. Inside, the workers do their job: knead the clay, filter it in a special tank, getting rid of small stones, then in a centrifuge bring it to a homogeneous mass and cast forms. This semi-finished product is used for finishing, clearing gaps and giving the products the final commercial appearance - coating with glaze and coloring. City of potters Lalejin

This is a factory method of producing ceramics, do you want to see the manual work? Of course! I go down to the basement room with brick arches, a dim lamp somehow illuminates the workshop of a hereditary master Potter. In his hands, the pliable clay becomes a work of art. He will give you tea and teach you how to create a bowl or pot on a Potter's wheel. Under my hands, the clay did not really want to become a bowl, it turned out to be a shapeless object. But I had a lot of fun and got dirty from head to toe. Workshop of a hereditary Potter in Lalejin

Vzgyad stops at a small mosque. You know, there are some temples that you just want to go to, and your feet lead you there. The men at the main entrance showed me the door on the left, which is the women's section. I sat on beautiful carpets, wept quietly and said to myself: if God did not leave me without a car, documents and money, then perhaps he will show me the way forward? And I accept it, whatever it is. 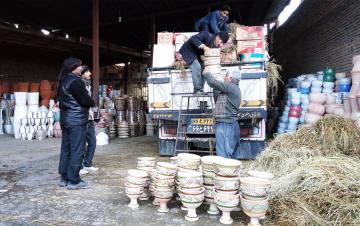