The final impact of COVID-19 on the country's auto industry is becoming increasingly less blurry. In the U.S., the Magic 8-ball foresees a significant hit to dealers and automakers in 2020, with J.D. Power now saying the already cooling market will see 3 million purchases vanish from sales ledgers.

The viral sales cull would bring the industry back to 2012-2013 levels, though at this point there's too much uncertainty to predict when things return to normal.

As reported by the Detroit Free Press , J.D. Power's study sees the country's 2020 vehicle sales tally coming in somewhere between 14 to 16 million vehicles --- down sharply from last year's 17.1 million, though the regional impact will vary. Prior to the pandemic's arrival, J.D. Power forecasted sales of 16.8 million.

The market has already shed some 38,000 sales in March, the report claims, with the decline accelerating as more states enact extreme social distancing measures. The impact on businesses, including dealerships, is compounded by an increase in (at least temporary) joblessness and virus-borne uncertainty.

As of this past weekend, new vehicle sales in Seattle had dropped 18 percent for the month, with San Francisco falling 17 percent. Those results, both coming from viral hotspots, are outliers compared to stable car-buying locales like Detroit and Minneapolis, the report said, but that will change.

A bright spot in the doom and gloom, J.D. Power said, is a glut of leases coming to an end. In the second quarter of 2020, some 1.8 million lessees will find themselves in need of new wheels.

Last week, Morgan Stanley analyst Adam Jonas forecasted a U.S. sales drop of 9 percent for the year --- a steep fall-off from the previously forecast 1-2 percent drop. That puts the annual tally at about 15.5 million vehicles. LMC Automotive sees global sales falling 4 percent in 2020, adding that the virus' impact could spill over into 2021. 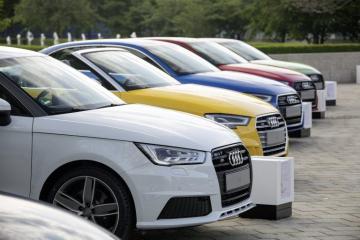