Senate Majority Leader Mitch McConnell (R-KY) walks from his office to the Senate floor on Wednesday.

As Republican and Democratic lawmakers and the Trump administration work on measures that could stimulate the U.S. economy and help workers, analysts say a big stimulus package could pass Congress next week.

"While the Senate might stay in over the weekend to continue their work and possibly vote on a bill, the more realistic expectation should be that this will pass next week," she wrote, adding that it's also possible that passage might not come until April 2. "Ultimately this package will likely total somewhere in the range of $1.5T once Democratic and Republican priorities are incorporated."

And see: Here are the industries that could get coronavirus aid from the U.S. government

Analysts at Beacon Policy Advisors said they are confident that Congress will ultimately pass a robust stimulus package, but they're "not as confident that it will happen as fast as financial markets are expecting." U.S. stocks SPX, -0.08% DJIA, -0.40% were falling Thursday and have been hammered repeatedly this month by coronavirus-related worries.

The stimulus package that will be proposed by Senate Republicans looks likely to include Trump administration ideas such as a $50 billion lending facility for airlines, $150 billion for other hard-hit sectors and $300 billion for a new program that would provide loans to qualifying small businesses, the Beacon analysts said. There also could be direct payments to taxpayers in two rounds, with $250 billion starting April 6 and $250 billion beginning May 8.

"We nonetheless remain skeptical about this timeline due to the amount of time it will take to process Americans' information, particularly if the Internal Revenue Service is means testing individuals, as expected," Beacon's team said, referring to the planned checks for individuals. "It took approximately two and a half months to start sending out checks when stimulus checks were included in legislation passed during the 2008 crisis."

The best-case scenario is that a stimulus bill passes the Senate by the first half of next week and the House by the end of next week, according to Beacon's analysts. Their base case is the bill passes the Senate between March 25 and March 31 and the House by April 3. Their worst-case scenario is stimulus legislation doesn't pass until after April 3, "but even then, only delayed by a week or two," Beacon's team wrote.

President Donald Trump late Wednesday signed a coronavirus bill approved by the House and Senate that targets paid leave and testing, and that follows an initial $8.3 billion emergency spending plan that came together in early March. 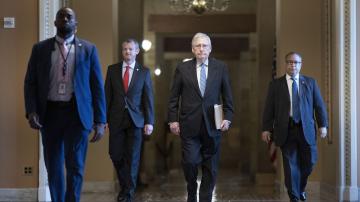