Getty Images Mortgage rates soared higher this week after the federal government said it would spend billions of dollars to support Americans through the coronavirus outbreak.

Interest rates on home loans shot up higher over the past week as demand for refinances remained strong despite major fluctuations in stock and bond markets.

The 30-year fixed-rate mortgage averaged 3.65% during the week ending March 19, an increase of 29 basis points from the previous week, Freddie Mac FMCC, -2.20% reported Thursday . This was the largest weekly increase in the average 30-year mortgage rate since November 2016, and it's the highest mortgage rates have been since mid-January.

The noted uptick in 30-year fixed-rate mortgage rates is a major reversal from just two weeks ago, when they had hit a record low at an average of 3.29% .

While the Federal Reserve had announced that it was cutting its benchmark interest rate to a range of 0.25% to 0%, mortgage rates do not generally track the Fed's movements directly. Instead, they roughly follow the direction of longer-term bond yields, including the 10-year Treasury note.

The 10-year Treasury yield TMUBMUSD10Y, -7.22% rose above 1% this week for the first time in roughly two weeks. The increase came about largely as a result of Congress' approval of a major spending package aimed at curbing the economic impact of the coronavirus pandemic in the U.S., as well as discussions of a broader, more expensive stimulus package .

"The plan will require a large amount of government debt to be issued, in the form of U.S. Treasuries," said Zillow ZG, +5.10% economist Matthew Speakman. "Knowing that more bonds will be in the market soon, current Treasuries suddenly warranted lower prices in recent days, which coincide with higher yields."

Bond yields also responded to the Fed's actions this week, including its choice to re-engage in bond purchasing activity in order to stimulate financial markets.

Meanwhile, lenders continued to have their own issues to grapple with when it came to pricing mortgage rates this week. "Mortgage rates rose again this week as lenders increased prices to help manage skyrocketing refinance demand," said Sam Khater, Freddie Mac's chief economist, in the report.

Those aiming to get a new mortgage --- either to refinance their existing home loan or to purchase a mortgage --- shouldn't worry too much about interest rates staying this elevated. Economists have said lenders will likely bring rates back down to an extent once they've worked through their backlog of applications. And with the coronavirus outbreak still playing out, market volatility is likely here to stay for some time.

"With so much still uncertain, and market movements remaining unpredictable, it's a losing game to try and predict where rates are heading next," Speakman said. "But it's safe to say that more dramatic movements are likely on the horizon." Jacob Passy is a personal-finance reporter for MarketWatch and is based in New York. 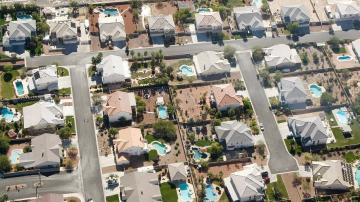