Overwatch: the new hero Echo is already on the test servers!

The 32nd overwatch hero named Echo is already available on test servers in the PC version of the game! This was announced by Blizzard in the official Twitter of the game.

Echo is the latest technology: it is a multi-purpose adaptable robot designed to perform a variety of tasks on the battlefield. It belongs to the "Damage" category.

Echo was created by Dr. Mina Liao, a scientist from Singapore and one of the first members of Overwatch. Even before Overwatch, Dr. Liao was considered one of the most prominent experts in the fields of robotics and artificial intelligence.

The basis of the project "Echo" formed a design Omnicom, which she had long dreamed of to improve. As a result, Dr. Liao was able to develop a multi-purpose adaptive robot that can be trained to perform any task-from medical care to construction. However, Mina severely limited the ability of her creation to make decisions on its own. In Overwatch, the use of Echo was treated with caution, but Liao gave the new robot a powerful artificial intelligence that constantly analyzed what was happening. That is why echo has learned so much from Its Creator --- including the manner of speech.

Learn more about Echo here. The release date of the heroine on the main servers and consoles is still unknown.

The online shooter Overwatch was released in 2015. It is now available on PC, PS4, Xbox One, and Nintendo Switch. 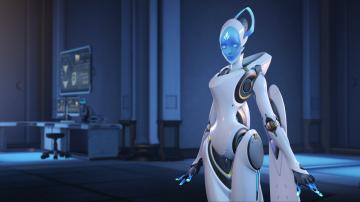