The English Premier League has been suspended until at least the end of April as coronavirus spreads across the U.K. and players train at home in self-isolation.

The league was first postponed last week until Apr.3 but the suspension was extended on Thursday as the virus continues to spread.

The Football Association has agreed to extend the season "indefinitely" and the leagues issued a joint statement committing to finish the 2019-20 season "as soon as it is safe and possible to do so." It comes despite calls for the season to be declared null and void, most notably from Karren Brady vice-chairman of West Ham - who sit just above the relegation places. Such a move would mean Liverpool's 30-year wait to win the league would continue, despite their 25-point lead.

The European Championships, due to take place in June, have also been moved to 2021, allowing time for domestic leagues to be completed later this year.

Players across the league have been training in self-isolation at home - and finding other ways to keep busy - while some clubs have returned to training with no contact.

Following Arteta's, the entire Arsenal first-team squad and coaching staff went into self-isolation and the Premier League called an emergency meeting. The league was then suspended until at least April 3 along with the English Football League and international fixtures.

Hudson-Odoi became the first Premier League player to test positive for the virus, and the Chelsea squad also went into full isolation. Everton also said its players and coaches have been put in isolation after a player reported symptoms and Bournemouth players are also self-isolating. Betting stocks have been over the prospect of a delay or cancellation to the season. Ladbrokes owner GVC UK:GVC has slumped 63% so far this year, while William Hill UK:WMH has dropped 80.5% year-to-date.

Italy's Serie A league has already been suspended until at least Apr. 3 following a government decree, while Spain's La Liga has been postponed for two weeks after Real Madrid players were ordered into quarantine. Major League Soccer was suspended in the U.S. for 30 days on Thursday and the National Basketball Association season has also been halted. Golf's U.S. Masters tournament in Augusta, Georgia has also been suspended.

The English soccer league was one of the few competitions in Europe unaffected by the coronavirus pandemic.

That changed on Friday as the virus continued to spread through the English game. Two entire teams are now in self-isolation for a two-week period and Leicester City manager Brendan Rodgers said three of his players have shown signs of symptoms.

Arsenal said it was working to trace any other people who have come into close contact with Mikel Arteta in recent days.

Head of football Raul Sanllehi said: "Mikel and the full first-team squad, players and staff, will be fully supported, and we look forward to getting back to training and playing as soon as medical advice allows. Obviously Mikel's full recovery is the priority now for us all."

Arsenal's game with Manchester City --- due to take place earlier this week --- was postponed after Olympiacos owner Evangelos Marinakis tested positive for the virus. The Greek team had played at Arsenal's Emirates Stadium less than two weeks before. However, Arteta is not believed to have any contact with Marinakis.

European stocks rise Friday, as investors appear willing, for now, to put their faith in vast stimulus moves from central banks and governments to shore up economies against the fast-spreading coronavirus pandemic. 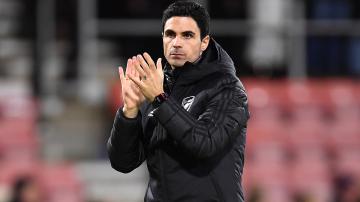