Julie Snell and Lisa McDonald Hanes had planned to open their native plant nursery in a Philadelphia suburb earlier this month.

The opening was pushed back when paperwork on a loan backed by the Small Business Administration delayed the date they bought Redbud Native Plant Nursery in Media, Pa. They changed opening day to this Saturday, just in time for the spring planting season.

But the fast-spreading coronavirus, and Pennsylvania's ever-tightening efforts to control it, continue to blow up their plans. When Gov. Tom Wolf urged all nonessential businesses to close March 16 and others to move to pick up only, Snell, 53 years old, and Hanes, 43, pivoted to figuring out online sales and curbside pickup of everything from quart-size pots of perennial plants like coneflowers and coral bells to seven-gallon containers of winterberry holly and serviceberry shrubs.

Now they don't even know if that is an option. On Thursday night, Wolf announced that all businesses that aren't "life-sustaining" must close immediately . Nurseries are on the list of what's allowed, but Snell and McDonald Hanes still needed to hire staff and get everything working. Earlier this week, they were still filling out applications for credit-card processing. The website is still being updated.

"We know how much money we have to make to make the rest of the year work," Snell said. "March, April, May --- that's when the big season is. And then September, October, into early November." Redbud Native Plant Nursery in Media, Pa.

Redbud, which operated for 17 years under its original owner before Snell and McDonald Hanes bought it this month, is one of millions of businesses across the U.S. suffering as state officials order closures to contain the spread of the coronavirus and the COVID-19 disease it causes. Layoffs are already soaring, and a Goldman Sachs economist warns that initial claims for unemployment benefits could shortly top 1 million for one week and even reach 2.25 million . That's well over the peak of 655,000 claims during the 2007-2009 Great Recession.

But while officials in Washington, D.C., discuss bailouts for some big industries including airlines and sending checks to Americans, many small-business owners wonder how they will survive.

Snell spent part of Wednesday on a webinar put on by Temple University's Small Business Development Center on what kind of help may be available. A lot seems to be for businesses that have been in place for more than a year; Redbud, with its new owners, wouldn't qualify, she said. But she was told there may be more information about help for younger businesses soon.

Snell and McDonald Hanes say they aren't looking for a fresh loan --- to them, that's just a loan to pay back another loan. But they see how the Federal Reserve cut official rates to near 0% and contrast it with about 8.25% they are paying on a loan that is 50% guaranteed by the SBA.

"If they could reduce that interest rate, that would be a huge help," Snell said. "Or give us a grace period."

But they are disappointed by the federal government's slow response overall to the health crisis. "It's frustrating how they let three, four weeks go by without acknowledging" the reality of the coronavirus threat, McDonald Hanes said.

Snell and McDonald Hanes have been in business together since 2013, when they opened a Philadelphia landscape architecture business, Tend Landscape , which provides design services for projects often in the public realm. It can take a long time from bidding for work, to doing it, to getting paid.

When they heard the owner of a native plant nursery was selling, they bit. They figured they could add services such as garden design work for homeowners, garden coaching and more. And it could provide another source of income.

This week, even as the coronavirus kept undoing their business plan, they were awaiting more plants they've ordered from small propagators, primarily in Pennsylvania and New Jersey.

Encouragingly, customers were calling, looking for plants. And Snell said she believes plants have the power to heal. 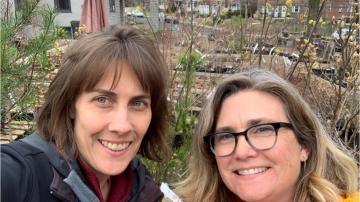