Zenith Romeo Y Julieta: created a watch for him and for her

The new product is a romantic interpretation of the legendary Elite Moonphase model.

The love story of Romeo and Juliet unfolded under the cover of night, so it was the" night " theme that became dominant in the watch Elite Moonphase Romeo y Julieta, equipped with a moon phase indicator for both hemispheres. On it, the faces of two lovers, laser-etched on two silver disks, seem to float across the sky. Men's model Romeo - with a blue dial, designed in the technique of guilloche "sun rays", and women's model Julieta --- with a red dial. Both versions are decorated with the logo of Romeo y Julieta cigars.

The case of the watch is made of steel with a diameter of 40.5 mm in the male version and 36 mm in the version of Julieta. The bezel of the bright red women's version is decorated with 75 diamonds. The watch is accompanied by an alligator leather strap in the color of the dial with a contrasting lining.

The release of the Elite Moonphase Romeo y Julieta watch is limited to 145 pairs in honor of the 145-year anniversary of the Romeo y Julieta cigar brand. Each pair is placed in a special gift box. 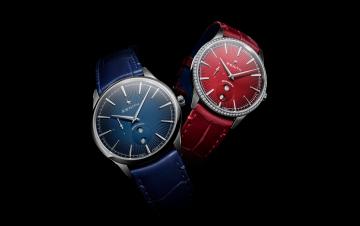