One around the world. Russian ushanka in an Iranian village

66th series about the round-the-world journey of the Muscovite Irina Sidorenko and her dog Greta: Bisotun, an ancient city and an open-air archaeological Museum. How to explain that you need help without knowing Farsi

A former employee of a Moscow luxury real estate Agency decided to go around the world in a car and in the company of a dog after several training trips. You can follow her movements in real time in the blog Around the world . In the previous series Irina visited the workshop of a hereditary Potter, got caught in a snowstorm in a mountain gorge and evacuated the car after a dangerous breakdown.

I got into the Iranian Bisotun by accident. Rather, I specifically went to the East of the country to visit the ancient city and the famous archaeological Museum. But it was on the way here that my car broke down, all the cash went to repair, and the rest of the money went to gas. And I was standing at the entrance of the Museum and did not know what to do, because the entrance is paid. Bisotun, an ancient city with a huge Istria

What happens when a woman stands at the checkpoint in disbelief? The ticket clerk calls someone, a man arrives in a car, picks you up, takes you to the office, and introduces you to the main boss. This is Mr. Farid Saedi. The same chief boss of the Bisotun archaeological Museum complex. He gathered the entire team to meet the strange traveler, and then singled out a guide for" russian lady", and I followed my guide, listening to his stories. Walking through these places not only expands your horizons and knowledge of ancient history. Here you can breathe well, and the eye is happy with the views. And the rock itself impresses with its formidable grandeur. She has the right, she has seen a lot in her centuries-old life. Mr. Farid Saedi, Director of the Bisotun archaeological Museum complex

Bisotun rock rises on the North side of the age-old caravan trail and the main military route from Babylon and Baghdad through the Zagros mountains to Hamadan. The city of the same name stands at its foot, and on the stone slopes king Darius I left the famous Behistun inscription. The cuneiform text tells of the events of 523-521 BC, when Darius I ascended the throne of the Persian Empire. It is carved in three main languages of the state: ancient Persian-the native language of Darius, Akkadian-the language of the Babylonians and Assyrians, and Elamite-the language of the Elamites, one of the oldest cultural peoples who inhabited the South-Western regions of Iran. Bisotun rock rises on the North side of the century old caravan trail

If you walk around the natural Museum, you can see other ancient objects that have seen the events of different epochs and have survived to the present day. Since the Seleucid era, there is a statue of Hercules. Next to it are several reliefs from the time of the Parthian kings. A large piece of the cornerstone for another relief of military victory was set by the late Sasanian rulers. Bisotun archaeological Museum complex

Of course, I did not want to leave the city, where everything is steeped in history. So I stopped nearby, setting up my own little campsite in a convenient location. The weather allows, the Iranian sun is already shining in spring, still warming the winter air, leaving warmth on the rocks. Here it is, at last, a real camping life, with a fire, fragrant tea, buckwheat porridge and lamb bones for Greta! At the same time washed the Elantra and restored order in the trunk.

While I was camping, the car's battery ran out. According to the usual scheme, I go out on the road with the starting wires. Motorists in any country know what kind of help is needed in this case, and it is not necessary to know the language to explain --- I need to "light up".

However, the Eastern country has its own peculiarities. Before you make a decision and do something, even in the simplest case, you need to gather a Council or family Council, discuss all the details, make a plan of action and appoint a person responsible for its implementation. And now there are five people gathered near my Elantra, they are arguing loudly about something, they are making emotional gestures, they are measuring the distance between the open hoods of two cars, they walk around them several times, and only then the terminals are connected and the engine starts. And I have to wait patiently on the sidelines. The East is a delicate matter! Car service in Iranian

I am going back to Tehran, and my Indian visa is ready. You need to pick up your passport and find a way to cash out, because international Bank cards do not work in Iran, and cash is at zero. On the way, I look into small Iranian cities. Just like that, without a goal, to wander through the narrow colorful streets, look at the fancy ornaments on the walls of Iranian mosques, listen to the many voices of noisy bazaars. And smile, smile, smile. Because everyone here greets you with smiles. Streets of Iranian cities

Oh, you have a Russian hat! I exclaimed when I saw the man in the earflaps. "Hi, okay," he said in response. I bought the hat in Moscow when I was there at the world Cup. There he learned two Russian words. So now he wears an earflap and warms his ears. I am happy to meet such a small greeting from my homeland, and a little sad. You may have to complete the trip and return to Russia via Armenia and Georgia. With the visa of Pakistan, nothing has happened yet, and it is completely unclear which route I can continue on. Photo: "hi, good!"and he said, the man in the hat 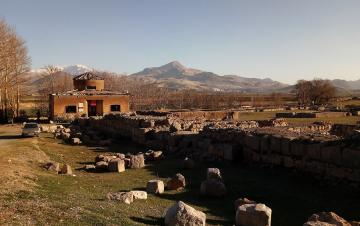