Which jobs will be at risk?

The scale of job losses is likely to hit unprecedented levels in the coming weeks and months as business activity in cities, municipalities and states is brought to a sudden halt in an attempt to lessen the spread of the COVID-19 pandemic.

Industries from energy and airlines to cruise operators are being hammered and a recent research piece by the developers of the U.S. Private Sector Job Quality Index estimates that some 37 million domestic jobs are vulnerable to layoffs due the temporary shutdowns created by the viral outbreak. COVID-19 was first identified in Wuhan, China, in December and has infected more than 318,000 people worldwide and claimed nearly 14,000 lives, according to data compiled by Johns Hopkins University as of Sunday afternoon .

"There is a subset of these workers, in jobs often offering substantially less income than the above average, who are particularly vulnerable to cessation of economic activity due to the spreading pandemic," wrote officials at the private-sector job quality index created by researchers at Cornell Law School , including Daniel Alpert, Jeffrey Ferry, Robert Hockett and Amir Khaleghi.

The report comes as economists are bracing for a wave of job losses that could drive claims for jobless benefits to the highest level in recent memory.

David Choi, an economist from Goldman Sachs, says initial claims for the week ending March 21 may jump to a seasonally adjusted 2.25 million , basing his analysis on recent anecdotes and news reports.

States around the country are already reporting a massive surge in the number of people applying for jobless benefits. MarketWatch's Jeff Bartash writes that claims for people receiving unemployment benefits could blow past a record peak of 6.6 million in 2009, if early figures hold.

The about-face for the jobs market, which had been a pillar of strength in an 11-year economic expansion , comes amid growing concerns about the domestic and global impact of COVID-19 on global supply chains and economies.

Some market participants and economists say that this crisis is so significant because it combines the financial and economic pain endured during the 2007-09 recession with the temporary restrictions on travel and movement that were present during the Sept. 11 terrorist attacks.

Read: As Dow wipes out over 3 years of stock-market gains, here's a warning about calling the bottom 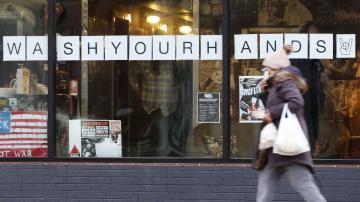