Since March 14, France has introduced a quarantine regime: all shops, restaurants, schools, institutions are closed, only grocery stores and some banks are open. Two days later, the President of Emmanuel macron has tightened quarantine due to the fact that the citizens did not heed the calls to give up meetings and events. Now everyone has to stay at home, except for those whose profession excludes remote work. It is forbidden to meet friends in the Park or go to visit parents. When you go outside, you need to fill out a special paper that specifies one of five possible reasons --- going to the doctor, for basic necessities, for work, for sports (within a radius of 2 km from the house and no more than 20 minutes) or for family emergencies. Failure to comply with the rules is punishable by a fine of €135. Periodically, you can see the army on the streets, but it does not yet closely monitor violators of the emergency regime.

Macron, in his televised address with characteristic drama, repeated many times: On est en guerre!! "We are at war!". He also asked his countrymen to show awareness and solidarity during the worst health crisis of the century. Solidarity is easier for the French than consciousness. At 20: 00, residents of Paris go out on the balcony and applaud the doctors fighting the virus on the front line.

But the consciousness of the population lacks. Even over the past weekend, when there were already more than 12,000 reported cases of COVID-19 infection in France, you could often hear French outrage over the quarantine on TV. Until recently, people looked with surprise at those who did not approach them by more than a meter, and recommended that they watch the news less. And last Monday, I had to stand for an hour on the street to pick up medicine at a pharmacy --- people in masks and gloves were standing two meters from each other.

The necessary quarantine measures were announced in France with a clear delay. After all, since March 8, the scenario that will develop in the event of inaction became absolutely obvious, and its price was clear --- we have before our eyes the example of Italy. However, for most of the French, these belated measures were a surprise. As early as Saturday, March 14, a large number of people were sitting in unopened restaurants. A friend of mine, who was visiting friends when the news of the quarantine was announced that day, said that it killed the holiday atmosphere. Julien Mattia / Anadolu Agency via Getty Images

In the first 48 hours after the announcement of tougher measures, panic began --- people rushed to stores, queues stretched to entire streets, there were interruptions with some products, retail chains stopped delivering products to their homes. It took several days for the situation to return to normal.

Now most people in France work from home. And my small investment Bank closed its office on the Champs-Elysees. Last week I had a fever and a sore throat. In a panic, I started calling my doctor generaliste --- every local resident is assigned to such a doctor. The doctor explained to me that no one except patients in hospitals and with severe symptoms is tested, because there are not enough test systems for everyone, and there is no sense in isolation in this case.

What is the total number of cases? No virologist can answer this question. However, local epidemiologists have officially declared that a strict quarantine is the only way to avoid a complete collapse of the health system. In a situation of complete uncertainty, France is preparing for the worst. There are quite a few intensive care wards in the country --- 11.6 per 100,000 population compared to, for example, 10.6 in South Korea, which is cited as an example for fighting COVID-19. But as experts say, no system can cope and will not be able to absorb a shock of this scale. In the East of the country, where there were initially strong foci of the virus, there is already a shortage of ventilator equipment and resuscitation places. The government is urgently trying to reallocate medical resources and has announced a General mobilization of doctors from dentists to podiatrists.

Huge resources have been thrown at the declared war with COVID-19 --- the government has promised to spend €300 billion to minimize the losses of businesses and households. The state will help pay salaries to companies during the quarantine, and low-income households will be exempt from rent and electricity and gas bills. In two of Macron's addresses to the nation, there is another, perhaps the most important message-life in France and around the world after COVID-19 will not be the same as before. 1 out of 10 Gabrielle Fonseca Johnson / Reuters 2 out of 10 Anushree Fadnavis / Reuters 3 out of 10 Andrew Kelly / Reuters Kuala Lumpur, Malaysia. March 22 5 out of 10 Sylvain Cherkaoui / Reuters Prague, Czech Republic. March 20 7 out of 10 Vatican Media / Reuters 8 out of 10 Sergey Sevostyanov / TASS 9 out of 10 Ronen Zvulun / Reuters 10 out of 10 Issei Kato / Reuters 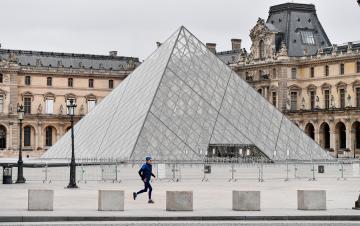