An Italian priest who gave a respirator to a younger coronavirus patient he did not know has died of the disease.

Father Giuseppe Berardelli, 72, died in hospital in Lovere, Bergamo - one of the worst-hit cities in Italy.

At least 50 priests have reportedly been killed by coronavirus in Italy.

The world's worst affected country with 6,077 deaths so far, Italy has been under prolonged lockdown as it tries to stop the spread of infections from the worst-hit northern region of Lombardy.

There are more than 360,000 confirmed cases worldwide. Europe is now at the epicentre of the crisis and the US is facing a surge in cases.

Who was Fr Berardelli?

Giuseppe Berardelli, the main priest in the town of Casnigo, died last week in Lovere hospital.

According to the hospital, he refused to use a respirator his parishioners had bought for him - choosing to give it to a younger patient, instead.
Skip Twitter post by @JamesMartinSJ

Fr. Giuseppe Berardelli, a 72-year-old priest who gave a respirator (that his parishioners had purchased for him), to a younger patient (whom he did not know), has died from #coronavirus.

Residents of Casnigo were reported to have applauded from their windows and balconies as the coffin was taken for burial. There was no funeral.

On Tuesday, Pope Francis led a prayer for the deceased doctors and priests, "thanking God for their heroic example in serving those who were sick".

What is the situation in Italy?

Italy shut down most businesses and banned public gatherings nationwide on 12 March as it tried to halt the spread of the virus.

Bars, restaurants and most shops have closed, as have schools and universities.

The lockdown has been extended, and Prime Minister Giuseppe Conte has said it has helped prevent "the collapse of the system". Image copyright PIERO CRUCIATTI Image caption Priests have been celebrating funeral services without relatives in Italy

On Tuesday, it reported a slight slowdown in the rate of infection for a third day in a row. But at more than 600 deaths a day, it is far from bringing the pandemic under control.

Italy has 63,927 people with Covid-19, the disease caused by the virus. So far it has reported 6,077 deaths and 7,432 people who have been discharged from hospital after recovering.

But the number infected could be far higher. Angelo Borrelli, Italy's civil protection chief, told newspaper La Repubblica on Tuesday it was "credible" to estimate the numbers are 10 times higher in reality.

"In the next few hours... we will see if the growth curve is really flattening," he told the paper.

What is the situation worldwide?

The World Health Organization (WHO) has warned that the coronavirus disease pandemic is "accelerating", with more than 300,000 cases now confirmed.

But WHO Director General Tedros Adhanom Ghebreyesus said it was still possible to "change the trajectory".

He urged countries to adopt rigorous testing and contact-tracing strategies.

In the UK, Prime Minister Boris Johnson announced on Monday night that, with immediate effect, "people will only be allowed to leave their home...for very limited purposes". The number of people who have died in the UK rose to 335 on Monday. 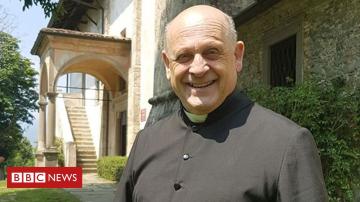