Image caption Parks are closing across the country but many Russians are not sure what all the fuss is about Russia is beginning what Vladimir Putin called a "non-working week", to try to slow the spread of the coronavirus. The government is urging people to stay at home, though mixed messaging has left many Russians confused. Officials now hint the new restrictions could be extended beyond 5 April, depending on the health situation. The number of Russians infected with Covid-19 passed 1,000 on Friday, with most cases detected in Moscow. Based on that figure, the Kremlin spokesman has stressed that there is "de facto no epidemic" here, comparing Russia's position favourably with the crisis in Europe. And whilst state TV's rolling news channel has changed its name to We're Staying Home - broadcasting from presenters' living rooms - many people are struggling to adjust after its previous insistence that Covid-19 was a "foreign threat". Media playback is unsupported on your device Media captionVladimir Putin visited a Moscow hospital for coronavirus patients So when Mr Putin announced a paid week off work for all, there was a rush to book holidays. 'Not a holiday' The governor of Krasnodar region, which includes the Black Sea resort of Sochi, had to order the closure of all shopping centres, parks and restaurants - and limit flights - after hotel reservations sky-rocketed. "This is not a week of extra leave or holiday," explained Benjamin Kondratiev on Instagram, clarifying the president's speech. He added his own call for "self-discipline" to get through what he called the "bad period" of coronavirus. Many Muscovites have already headed out of town to their dachas, or summer houses. Image copyright AFP Image caption More Muscovites have been wearing face masks in recent days In Moscow, there has been a noticeable increase in people in facemasks on the streets since Mr Putin's national address. Supermarket staff have begun wearing them and there are bottles of hand sanitiser in coffee shops. * * Food shops will remain open, as well as other essential services, but from this weekend cafes and restaurants can offer takeaway only. At one popular coffee chain, a barista who's now selling drinks through a window said coronavirus was the only topic of conversation these days, and that people were worried. Image caption This barista is selling fresh coffee from a window but Moscow's economy is already being hit Her own hours have been cut; in other sectors, people are already being laid-off. 'The weather's great' Still, some Muscovites can't understand what the fuss is about. "There's deaths from cancer and other diseases all the time and people still go to work, take the metro or go to the park," Dmitry shrugged, the day before the bicycle-hire shop he works at was closed. "I'll definitely be going out on the streets this week," he said. "The weather's great!" Image caption Muscovites have been out enjoying the spring sunshine A Latvian man passing with a pushchair was less positive. "I think these measures are late," Krist said, on a break from remote-working. "Look at Italy and Spain. People were out and about there, too, and now things are scary." Gorky Park, nearby, has already been locked shut for two days. "We did as we were told," a security guard said through the fence. "I'm not sure how long it will go on for." The Kremlin says the new restrictions are for a week, "for now", although in Moscow people over 65 have already been told to stay inside until mid-April. The mayor cancelled their free transport passes, just in case any were tempted to test the new rules. * A SIMPLE GUIDE: * AVOIDING CONTACT: * STRESS: * VIDEO: 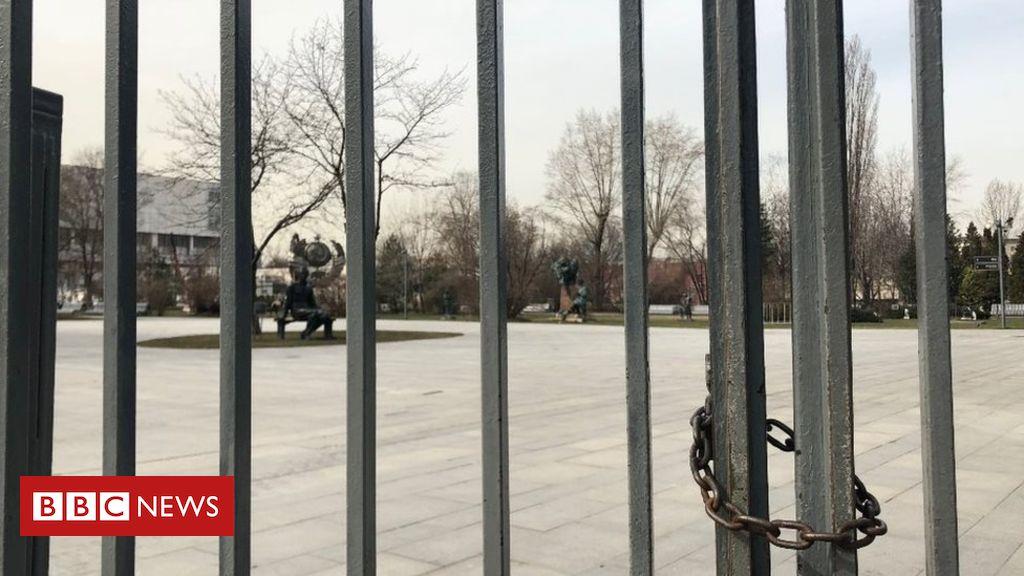