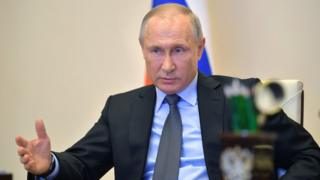 Russian President Vladimir Putin has said the military could be deployed to help tackle the coronavirus outbreak, after the number of cases in the country rose sharply.

He told government ministers that "all the capabilities" of the Russian military "can and should be used".

His comments came as Russia recorded its largest daily rise in confirmed cases, with 2,558 new infections.

It brought the total to 18,328, with the vast majority of those in Moscow.

"We see that the situation is changing almost daily and, unfortunately, it is not changing for the better," Mr Putin said during a video meeting with top officials on Monday.

"The number of sick people is increasing, including more and more cases specifically of the severe form of the disease. The next few weeks will be decisive in many respects," he added.

He also pointed to other European countries, such as Italy, that have utilised the military in their response to the Covid-19 crisis.

"We need to use this experience," he said. "The capabilities of the Russian Defence Ministry, if necessary, can and should be used here."

Russia's official death toll stands at 148, which is far lower than in many other European nations such as Italy, Spain and France.

But experts have warned the country is in the early stages of the epidemic.

Lockdown measures have been introduced in the capital Moscow, the worst-hit area, as well as several other regions. People have been told to stay at home unless there is an essential reason for them to go out.

Moscow has introduced an electronic system that issues permits to people who need to leave their homes. But it has been beset by technical issues, which officials have blamed on cyber-attackers. Image copyright Getty Images Image caption Ambulance vehicles queue at the entrance to a medical clinic in Moscow, Russia's worst-hit area

Meanwhile, doctors in the city have warned that hospitals are nearing capacity, and video shared on social media showed dozens of ambulances queuing to deliver patients.

What's the latest elsewhere in Europe?

While health officials believe Russia is in the early stages of its coronavirus epidemic, other European nations are beginning to ease their lockdown measures.

Slowing infection rates are raising hopes that strict social distancing measures are curbing the spread of the virus.

People in manufacturing, construction and some services are being allowed to return to work in Spain, one of the worst-affected countries.

Italy - the hardest-hit country in Europe with almost 19,900 deaths - will also allow a narrow range of firms to resume operations on Tuesday. 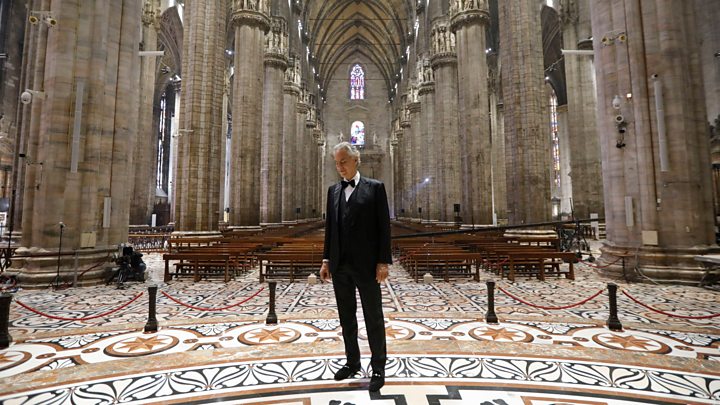 In Germany, where 3,022 people with Covid-19 have died, pressure is growing from businesses for a plan on how to exit the country's lockdown. On Wednesday, Chancellor Angela Merkel will discuss a strategy with regional leaders.

Elsewhere in Europe, the number of people who have died with the virus in the Netherlands rose by 86 to 2,823 on Monday. The total number of cases increased by almost 1,000 to 26,551.

And in France, which is expected to extend its lockdown until 10 May, police said dozens of worshippers defied the measures to attend a secret Easter Mass on Saturday.

A priest was fined while other churchgoers were given a warning, the AFP news agency reports.