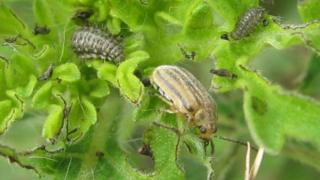 Scientists say the impact on human health across Europe of the invasive ragweed plant may be "seriously underestimated".

Allergies caused by common ragweed (Ambrosia artemisiifolia) affect around 13.5 million people in Europe, according their study.

But the authors say the plant could be controlled by a beetle, which is itself non-native in Europe.

The North American ragweed leaf beetle (Ophraella communa) arrived accidentally in Europe in 2013. The beetle attacks ragweed foliage; field studies in Italy have proved that the leaf beetle can reduce ragweed pollen by 82%.

The ragweed also hails from North America and is now established in 30 countries across Europe, from Iberia and the Balkans to Scandinavia and the British Isles in the north.

The pollen from this invasive plant causes a range of symptoms from sneezing to itchy eyes. It also aggravates conditions such as asthma and eczema.

Urs Schaffner, from the CABI in Delémont, Switzerland, and colleagues quantified the economic benefits of controlling ragweed using the leaf beetle.

Dr Schaffner said: "Our study provides evidence that the impacts of common ragweed on human health and the economy are so far highly underestimated, but that biological control by Ophraella communa might mitigate these impacts in parts of Europe."

Using data from the European pollen monitoring programme, Dr Schaffner and colleagues mapped total seasonal ragweed pollen in Europe from 2004 to 2012 - prior to the introduction of the beetle.

To arrive at a number of patients suffering from ragweed pollen allergy, the researchers compared their European-wide assessment with detailed healthcare data from southeastern France. Image copyright Getty Images Image caption The ragweed pollen can cause a range of symptoms from itchy eyes to sneezing

They were then able to determine the overall economic costs of healthcare to treat the symptoms and other effects - such as lost work time - of ragweed pollen.

But they also concluded that biological control of the ragweed plant using the leaf beetle could reduce the number of people with an allergy from 13.5 million to approximately 11.2 million and cut the health costs from €7.4bn to €6.4bn per year.

"At this point in time, biological control of ragweed is already happening in Italy," said Dr Schaffner.

Dr Schaffner said that some years ago, Australia considered the beetle for release there. But, he explained, "they found that under laboratory conditions O. communa can complete its development on sunflowers and thus rejected it as a safe biological control agent.

He told BBC News: "Then, after the beetle was accidentally introduced into China, the Chinese did a number of field studies and found no evidence that O. communa would actually attack sunflowers under field conditions. Our studies in Northern Italy revealed very similar findings."

In addition, said senior author Prof Heinz Müller-Schärer, the beetle has co-existed with sunflower crops in the US for decades. "We found no single report of any damage by this beetle in sunflower in the USA," he said.

But the researchers want to carry out further testing before the beetle is deliberately spread.

The beetle is better suited to warmer temperatures than the colder climates found in Northern Europe. But there may be a way round this problem.

"In northern Italy, the climatic conditions allow the beetle to complete four generations within one season, which enables the beetle to build up very high densities," said Dr Schaffner.

"In countries with a cooler climate, this may not be possible; in those cases, mass releases of the beetle early in the year may be an option to increase the impact of the beetle on the weed."

Prof Müller-Schärer told BBC News: "In addition, experiments are presently underway to select for cold-adapted beetle strains that could then be released in cooler ragweed areas of Europe." 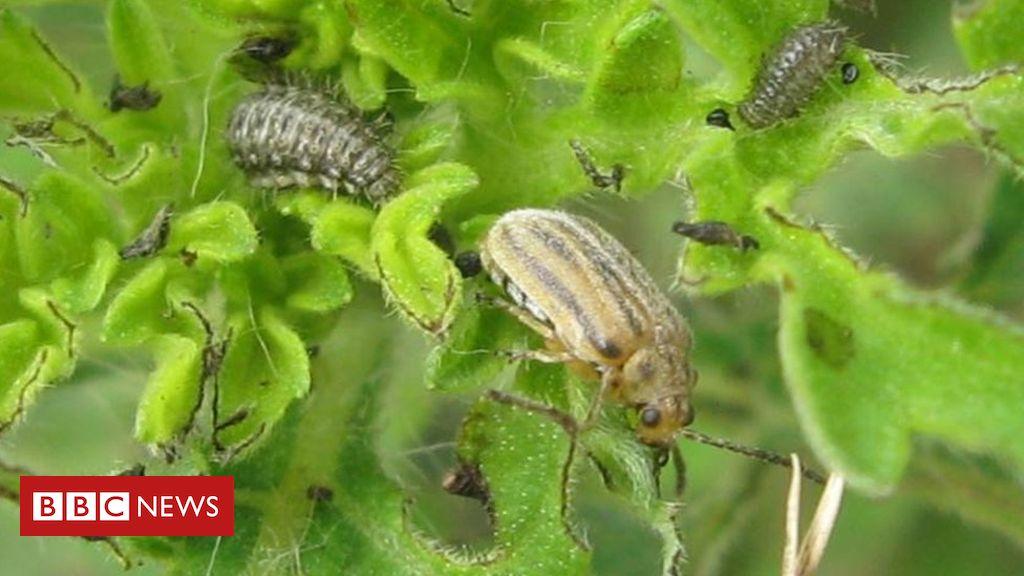