The developers of Path of Exile 2 take the game's soundtrack very seriously. At least, this conclusion can be drawn from the words of the music Director and composer of the Grinding Gear Games Studio ++Kamil Orman-Janowski++ in the latest video.

In the sequel, the authors will remain true to "dark and bold sounds", but will raise them to a new level. For example, the typical Symphony orchestra in music will become much smaller, but synthesizers --- more. In General, the composer aims to write a kind of tribute to the music from Diablo II .

Like the first act soundtrack, Path of Exile 2 's music is based on three pillars: folk/ethnic motifs, tribal motifs, and small elements of experimental industrial. In particular, ++Orman Janowski++ was inspired by the compositions of the films are written ++Trent Reznor++ (Trent Reznor) --- the leader of the industrial group Nine Inch Nails.

When creating music++Orman-Yanovsky++ would put the game on a separate screen and start composing songs based on what he saw. So, to emphasize the heavy atmosphere of the crypt, the composer used the whisper of spirits, sounding now on the left, then on the right. The hunting grounds soundtrack also features trance-jamming drums and other rhythmic motifs, including guitar.

In the continuation of the battle with the bosses will become more difficult, so in the battles with them, the music will be more intense --- this will help achieve the motives that instill fear in the players.

So that you better understand the ambitions of developers: ++Orman-Yanovsky++ wants to ensure that when you hear music from the game many years later, you will experience a sense of nostalgia.

You will be able to fully evaluate the soundtrack in at least six months --- the public beta test of Path of Exile 2will not start until the end of 2020. It is too early to talk about the full release date.
PC 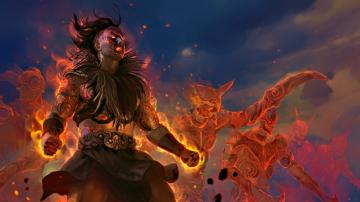