Paradise Killer - a detective game with an open world and an eccentric entourage: the plot takes place on an island where a rebellious human civilization tries to resurrect dead foreign gods.

The island is called Paradise. It is restored every few millennia. Here everything is imbued with psychic power --- with its help, idolaters try to revive alien deities. But the force also attracts demons-time after time they destroy the island. The Council that creates an alternative reality should ward off the devils.

The system gets better and better with each recovery and should reach the ideal when the next island is formed-Ideal-25. But on the eve of rebirth, the Council is killed, and Paradise is destroyed.

Find the culprits must be the main character-Lady Love dice, who is crazy about investigations. She gets to the island of Paradise and begins to study the evidence. The goal of the game is to search for evidence, record confessions, interpret facts, catch the killer among a lot of suspects, and build a concrete prosecution. The electronic assistant "Starlight" will help in this.

The island is built on the principle of the open world, so you can explore it as you wish. In addition, the developers have placed a lot of relics and artifacts that reveal the history of this place, as well as hidden special locations. To get there, you will have to dig into the hieroglyphs on ancient computers.

Creation Paradise Killer engaged in an independent British Studio Kaizen Game Works . It was founded by a former mobile game programmer (Phil Crabtree) and (Oli Clark Smith) from Supermassive Games , where he was the project's lead designer The Dark Pictures and head of the level design team Until Dawn .

Release Paradise Killer it should take place in the summer of 2020. Among the confirmed platforms, so far only PC. In Steam you can upload a demo version within the next few days. 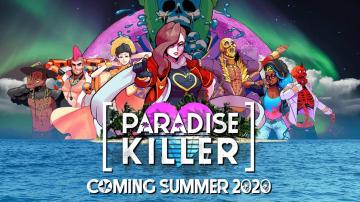