MicroProse - a legendary company of the end of the XX century, which was engaged in publishing and developing computer games. Formally, it ceased to exist 17 years ago, but now MicroProse resurrected and re-engaged in the publishing business.

Original MicroProse founded in 1982 by (Sid Meier) and (Bill Stealey). Among the games in her portfolio are the first parts Civilization , X-Com , Master of Orion and many other well-known projects. Myself MicroProse developed mainly simulators and strategies --- for example, series F-15 and Grand Prix . During its life, the company changed several owners and finally closed in 2003.

The company closed, but the brand remained. In 2019, the rights to the name MicroProse purchased (David Lagetti), one of the creators of simulation military software TitanIM . He opened a company under this name that will deal with military-themed games. To joined the above-mentioned --- we can assume that the inheritance is observed!

New MicroProse announced three games at once, which it will publish in the foreseeable future.

MicroProse is back! Not only that, we are also announcing three(!) titles that will be released under our flag. Find them at https://t.co/rAp3OcDmQX .

You are the commander of an American aircraft carrier in 1942. At your disposal-a whole battle group of planes and support ships. You can command what is happening both from the eyes of the commander on Board the ship, and with a more classic view from above.

The developers of Drydock Dreams Games promise a tenacious mix of Wargaming and simulator, where the mind is more important than speed --- time can be slowed down or paused so that the game does not turn into a "clickfest". The complexity and degree of simulation are configurable. The authors prepare more than 90 classes of ships and 40 types of air equipment. For sources of inspiration took classics like Carriers at War , Great Naval Battles , and Task Force and Pacific Air War from MicroProse .

Task Force Admiral --- completely single-player game that should start a whole series. The release date is not specified. Page b Steam already available.

Tactical game about the Second world war. Atelier Hexdraw focuses on an accessible interface and the principle of easy to learn, hard to master.

In Second Front there will be several campaigns and a map editor, more than 200 types of units for each nation (USA, Germany and the USSR), 22 types of terrain and 80 different buildings from several collapsing parts, as well as smart artificial intelligence for the virtual enemy.

Release date Second Front it is not disclosed, but the developers have already mentioned constant content updates that will be released after the launch of the base game. You can follow the game in Steam .

A military simulator dedicated to the battles of aircraft and ships in the entourage of the cold war. The game is created by a leading designer Cold Waters --- another sea battle simulator that received 84 % approval from Steam users.

In Sea Power they offer a dynamic campaign with a wide scope, historical and fictional scenarios, changing the time of day and weather conditions, advanced aircraft and ship physics, a customizable realism model, a detailed scenario editor and a system of replays after battles.

As with previous games, there is no release date, but there is a page in Steam . #microprose #microproseisback #announcement #games #gaming #pcgaming #legend @micro_prose 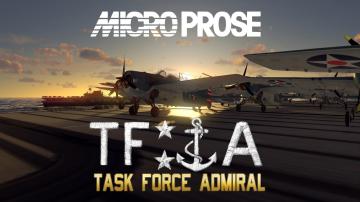