Today, Ubisoft launched a new temporary event, the Grand Larceny, in Tom Clancy's Rainbow Six Siege. Players have access to a new mode "Stolen goods" on the map "Base Hereford", designed in the old English style. The task is to protect your property at all costs.

The event will last for two weeks - from may 5 to may 19. At this time, the game will be available in 5x5 mode, decorated in a gangster style. The sound of gunshots in the walls of the headquarters will transport players to England 20s. Most of the operatives will be available for the game, but there are a few exceptions due to the gameplay features. You can't play for Glaz, Nomad, Buck, Montagne, Blitz, Caveira, Kali, Clash, Blackbeard, Lion, IQ, Tachanka, Recruit, Twitch, or Mozzie. Each of the characters will have access to the main shotgun and personalization elements presented in the collection " the Grand Larceny "and the"Screaming wealth" set.

The Stolen goods mode is different from the usual ones. There is no hostage, no position to capture, no charge to neutralize. There is also no preparation phase, and the Navigator does not have bots. The safes are located at different points on the map. The defenders will have to protect them, but the victory will bring them and the elimination of all opponents. In turn, the stormtrooper will need to either open the safes, or neutralize their rivals. Players will know where the safes are located. Also, when the floor is destroyed, there will be no metal beams left, and this will provide additional space for tactical maneuvers. There will be more destruction in this mode than ever before in Rainbow Six Siege.

The "the Grand Larceny" collection will include 31 items --- including exclusive trophies for Amaru, Fuze, Gridlock, Hibana, Maverick, Echo, Maestro, Kaid, Wamai and Warden. These vintage items will be featured on operatives that can be played as part of the event. The "the Grand Larceny" package can be obtained for completing event tests or purchased on the main screen for 300 R6 credits / 12,500 OS each. During this period, you will also have access to the "Flashy richness" set, which includes the "decorative" coloring and the "Six: Artfulness" icon. 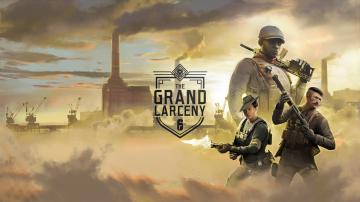