Chancellor Angela Merkel has agreed to reopen all shops as part of a deal with the leaders of Germany's 16 states to ease restrictions on society.

General contact rules will continue for another month. Schools will reopen gradually this term and Bundesliga football has been given the green light to restart.

The states have agreed to take control of timing the reopening.

They will operate an "emergency brake" if there is a new surge in infections.

A limited resumption has already begun, but this easing of restrictions is far broader.

Two households will be able to meet and eat together under the easing of restrictions, and elderly people in nursing homes and facilities for the disabled will be able to have visits from one specific person.

'Germany doing better than other countries'

"I think we can safely state that the first phase of the pandemic is behind us," Chancellor Merkel said. "But we need to be very much aware we are still in the early phases and we'll be in it for the long haul."

Bavarian leader Markus Söder said Germany was doing better than many other countries because it had adopted a good strategy nationally and regionally and everyone had remained patient. Social distancing of 1.5m (5ft) and hygiene were key to keeping the infection rate low, he said.

Germany has seen fewer than 7,000 deaths in the coronavirus pandemic - a much lower figure than seen in other Western European countries including the UK, Italy, France and Spain.

The Robert Koch Institute (RKI), a federal public health body, reported 165 deaths in the past 24 hours on Wednesday and some 947 new infections.

The rate of infection has been consistently low for some time, and Mrs Merkel said she was very pleased that the number of new, daily infections was into three digits.

What has been agreed?

The popular daily newspaper Bild announced on Wednesday that Germany was opening up again. And broadly that is what has been agreed.

Shops of up to 800 square metres (8,600ft) in size have already been allowed to open. All restrictions on shops will now be lifted, although masks must be worn and social distancing maintained.

Schools have already begun opening for older children; all pupils will be allowed to return to class gradually during the summer term. "Children quite rightly want to return to their normal lives," said Mrs Merkel.

During Wednesday's talks, state leaders agreed to take responsibility for the consequences of lifting the lockdown, which came into force on 17 March.

Germany, in common with other countries, is wary of a second surge in infections. If new infections rise to above 50 people in every 100,000 in a district over a seven-day period, then it will be up to the local authority in the affected area to reimpose restrictions.

A number of the 16 states have been less affected by the crisis, so some are more eager to ease restrictions than others.
Media playback is unsupported on your device
Media captionBerlin has seen small protests against the lockdown

Bavaria in the south plans to reopen restaurants on 18 May while Mecklenburg-Western Pomerania in the north plans to do that this Saturday.

Reopening restaurants and hotels is seen as a particular risk because it will heighten the number of people travelling across Germany and raising infection rates.

A return to football

The German football league, the Bundesliga, has been given the green light to kick off for the first time since March. Image copyright EPA Image caption Bayern Munich are among a number of Bundesliga clubs to have returned to training

So-called ghost games without spectators could start again as early as 15 or 21 May as long as a two-week quarantine is put in place for the players, in the form of a type of training camp. A decision on the date will be made by the football authorities on Thursday.

The Bundesliga will be the first major football league in Europe to resume after the pandemic. However, it is not without risk. Ten positive cases were revealed this week by the German football league out of 1,724 tests across the top two divisions.

Not everyone has been happy with the speed of reopening. Baden-Württemberg state premier Winfried Kretschmann accused "a whole row of colleagues of rushing ahead with their own openings".

Meanwhile, tourism commissioner Thomas Bareiss has held out the hope that Germans will be able to go on holiday this summer.

If the outbreak remained under control, he suggested they could go away in Germany and in neighbouring countries that had seen a similar drop in infections. 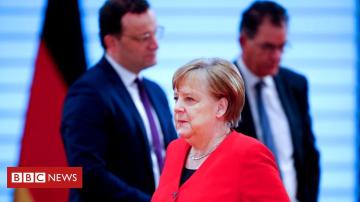