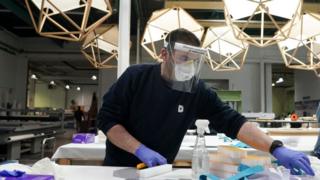 The European Union faces a deep and uneven recession, according to a new forecast from the EU's Commission.

The bloc's executive arm predicts a recovery in 2021 but warns that the uncertainty is exceptionally high.

The Commission predicts a decline in economic activity this year of 7.5%, and slightly more than that for the eurozone.

It warns the outcome could be worse if the pandemic turns out to be longer or more severe than currently envisaged.

European and other governments are intentionally blocking economic activity to contain the virus, so a sharp downturn is inevitable.

That said, the Commission's forecasts do put some rather stark numbers on the extent of the damage the EU can expect to sustain.

The Commission describes the downturn as a recession of historic proportions. Paolo Gentiloni, the Commissioner for the Economy called it "a shock without precedent since the Great Depression".

The impact will be uneven, Mr Gentiloni said, conditioned by how quickly the lockdowns can be lifted and by the importance of services such as tourism in the national economies.

The forecasts for specific countries do indeed point to an especially severe impact in some that that are popular tourist destinations.

The deepest predicted contraction of all is for Greece. At 9.7% that would be more than the worst in single year during the financial crisis, although the country did have a succession of bad years that added up to a much larger decline than is likely in 2020.

Spain and Italy are also forecast to have declines in excess of 9%. The revisions to the forecasts for two other Mediterranean countries- Malta and Cyprus - were also relatively large.

Inevitably, such an extensive impact on economic activity will mean job losses.

The Commission says that policies such as short-time working schemes, job subsidies and support to businesses should help to limit the damage to employment, but the impact on the labour market will nonetheless be severe.

The report predicts an increase in unemployment in every EU state. That said, the predicted highs are not as bad as they were in the aftermath of the financial crisis.

The two worst for predictions for this year are unemployment rates of 19.9% for Greece and 18.9% for Spain. Those figures are annual averages so there would be peaks during the year that are significantly higher.

But those annual figures are still well below the equivalent levels, which were in the high twenties, that the two countries suffered as a result of the following the financial crisis.

It will be harder, the Commission says, for young people to get their first jobs.

The growth predicted for 2021 at 6.1% is less than the contraction the Commission envisages for this year. It would therefore be 2022 at the earliest when the EU economy gets back to the level of activity it experienced last year.

The report also notes that unsuccessful trade negotiations with the UK could further impede any recovery:

"The threat of tariffs [on traded goods] following the end of the transition period between the EU and United Kingdom could also dampen growth, albeit to a lesser extent in the EU than in the UK."