Germans may be able to have summer holidays abroad, the country's tourism chief said, as European nations look at how to handle the summer break.

Germany was in talks with other nations about summer holidays, he said.

European governments are mulling how to handle the upcoming vacation period.

More than 100,000 people are confirmed to have died amid the coronavirus pandemic in Europe.

But latest data suggests countries hardest hit by the virus like France, Italy and Spain have passed the worst of the outbreak.

Italy's Prime Minister Giuseppe Conte told newspaper Il Fatto Quotidiano on Wednesday that Italians would be able to go on holiday this summer as the pandemic seemed to be under control.

But French President Emmanuel Macron sounded a note of caution on Tuesday, telling reporters it was "too soon to say whether we can take holidays" - though it would become clear by the start of June.

"What I can say is that we will limit major international travel, even during the summer. We will stay among Europeans and, depending on how the epidemic evolves, we might have to reduce that a little more."

What did the commissioner say?

Mr Bareiss said he had not himself booked a holiday yet, given the "great uncertainty" of the pandemic.

But if the outbreak remained under control, he said, people would be able to take holidays in Germany and in neighbouring countries that had seen a similar drop in infections.

"I hope that, given the good numbers, we will be able to relax the restrictions in the next four to eight weeks," he said.
Media playback is unsupported on your device
Media captionHow an Iranian airline "helped spread coronavirus"

Asked which countries Germans could visit, the tourism commissioner said it would mainly be neighbouring states "that can be reached by car", like Austria, France, Poland, Belgium or the Netherlands.

"But I would not yet write off other regions in Europe, such as the Balearic Islands or the Greek islands," Mr Bareiss said, adding that Germany was already in talks with other nations about how this could happen.

Greek Tourism Minister Haris Theocharis has told the BBC his country plans to open up gradually to visitors. "Travelling by road will be safer initially than flying and we'll see that kind of tourists earlier," he said.

Francina Armengol, president of Spain's Balearic Islands - including the popular islands of Majorca and Ibiza - specifically mentioned German tourism on Tuesday as she asked for greater economic support for the region.

According to Spanish news agency Europa Press, Ms Armengol said Germany was "essential" to tourism on the islands, and she would work with the country to make sure travel routes recovered "as soon as possible".

Her tone has changed since last month, when she urged Spanish authorities to keep the islands' ports and airports shut for as long as possible for health reasons.

Ms Armengol reportedly received some 200 letters from German investors with second homes in Majorca who were demanding the right to travel there.

She has now asked the government in Madrid and the European Union to set up a "homogeneous framework across the continent to guarantee the safe recovery of air activity". Image copyright Getty Images Image caption There are concerns about air travel amid the coronavirus outbreak

Though travellers and the tourism sector will take heart at these comments, it still remains unclear how much people will be able to travel abroad for pleasure.

"People won't be able to spend a holiday as they usually know it, on full beaches or in full mountain huts," foreign minister Heiko Maas said.

Some German states have already eased measures ahead of summer holidays. The northern state of Mecklenburg-Vorpommern has said people can now come and stay in their second homes there, for instance.

And governments across Europe, including in the UK, have spoken of people taking "staycations" - holidaying in their own countries, until the pandemic subsides further. 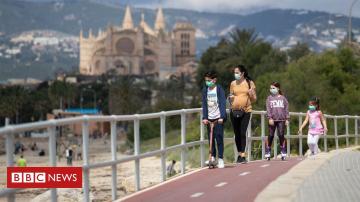