Studio Mirari\&Co. and publisher Maple Whispering Limited announced that the two-dimensional metroidvania with elements of "soulslike" Dark Light will go to "early access Steam" on may 8.

You will take on the role of a Dark Hunter who will have to survive in the apocalyptic world of cyberpunk. Local supernatural creatures are invisible to the naked eye --- you can only detect them using a special light source that is installed on your drone.

From the slain monsters fall fragments that increase the hero's energy. Break through non-linear locations will help a wide Arsenal, including melee and ranged weapons. Also promised are many ways to improve weapons, special equipment and a wide range of skills.

The full release, which should happen within 12 months, will be followed by a release on the Nintendo Switch. The "Early access" version includes two unique worlds, nine weapons, 10 types of enemies, three bosses, and a weapon upgrade system. In the full version, there will be at least four worlds, more than 25 types of weapons, more than 20 types of enemies, and several more bosses. 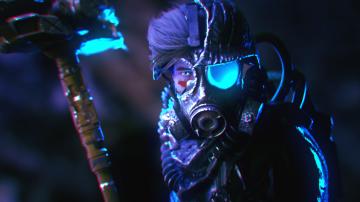