Creation Studio has announced the release of the 2B character figure from NieR: Automata. The peculiarity of the statuette is that it can be completely undressed. This functionality is gradually becoming a trend: at the end of April, the world presented another figure-Tifa from the recently released remake of Final Fantasy VII, it can also be removed all clothes.

The creators promise to release a new 2B in the near future. The figure will be sold in two colors --- black and white. The height will be 54 centimeters. The exact price of the statuette is still unknown. The trailer, which the creators published on YouTube, shows how well it is worked out and good.

Action NieR: Automata was released on PC and PS4 in 2017, the project reached Xbox One in 2018. The game was rated highly: the average score on Metacritic is 88 points from critics, and 8.9 from users. 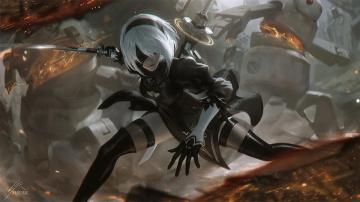