Tesla CEO Elon Musk appeared on the Joe Rogan Podcast this week , mentioning that the resurrected Roadster stands to see less love as the company turns its focus to other projects. Rogan, who already owns a Model S P100D and is an avid car collector, said he was interested in picking up the new Roadster once it becomes available. To that, Musk had some bad news. Higher-volume cars would have to come first.

"Roadster is kind of like dessert," he said. "We gotta get the meat and potatoes and greens and stuff."

The rest of the interview saw the two men discuss Musk's opposition to unconstitutional lockdown orders resulting from the coronavirus pandemic, as well as humanity's growing need for symbiosis with technology in order to ensure we're not left behind as artificial intelligence begins to surpass us --- boring stuff that has nothing to do with cars.

Despite Tesla's returning Roadster seeing frequent mention in 2017, we've been left with more questions than answers. Sales were initially expected to commence in 2020, with the car boasting the fastest acceleration you're likely to find on solid ground. Base models were alleged to offer a 2.1-second launch to 100 km/h (62 mph), while thruster-equipped betters were said to do so in 1.9 seconds.

Oh, did we not mention the proposed SpaceX package that adds 10 cold gas thrusters that improve performance (everything from improving lateral G forces to helping straight-line acceleration and braking)? Well, that may be because it seems fantastical and the kind of thing that would be prohibitively difficult to implement on a street car. Likewise is the 620 miles worth of range the car is supposed to yield from a single charge of its 200 kWh battery. With promises like that, it's no wonder the electric hot rod saw its launch delayed.

Musk even said the car may be able to hover off the ground, Back to the Future -style , and will definitely usher in the new three-motor drivetrain (the "Plaid Powertrain") for use in future products.

While we never expected all of this to make it to production, we knew Tesla set some lofty goals for itself; it wouldn't be surprising to see the model enter into a prolonged development phase. In 2019, Musk announced the next-generation Roadster would be delayed until 2021. The Model S Plaid will now lead with the new triple-motor drivetrain and will be added to the Roadster after launch.

But that date is looking almost as far into the future as when the car was initially announced in 2017. In addition to an improved Model S, Elon told Rogan he also wants to get the company's Cybertruck out ahead of the Roadster. And he's a fool for saying so, right?

Nah, not really. While the Roadster sounds like it'll be the craziest thing on the market, we're not positive it can deliver on all of its claims. Achieving a 600-mile range would be a colossal triumph in itself, but Musk is basically promising to build the world's fastest car (with low-level flight capabilities) for the low price of $250,000.

Unfortunately for some, the buzz around Cybertruck is fresher and louder. It also happens to be in an emerging segment of vehicles (battery driven trucks) that several manufacturers have suddenly taken an interest in. It wouldn't pay for Tesla to wait to deliver its pickup until after Ford, General Motors, Rivian, Lordstown Motors, and whoever else manages to beat it to the punch.

Other aspects impacting the timing of the Roadster launch, according to Musk, include increasing production volumes for the Model Y and completing a new Tesla factory in Germany. Current projections have that facility kicking off in the middle of next year, meaning the Roadster probably wouldn't enter into production until late 2021. 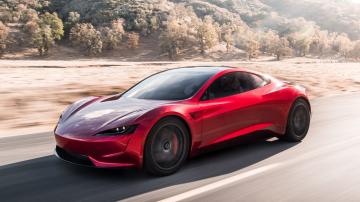