In September 1945, Berlin hosted a General Victory Parade of the USSR and its allies-the United States, great Britain and France. In honor of Victory Day, Gaijin Entertainment will recreate the historical event in the online action game War Thunder .

According to the developers, the game parade reproduces the real one as reliably as the capabilities of War Thunder allow . Samples of military equipment look the same as 75 years ago. The only serious assumption is the appearance of aviation: in fact, air cars did not participate in the celebration.

"75 years ago, the whole world rejoiced in the victory over an incredible evil, which was won through common efforts. It is especially important to remember this now, when the world must once again unite to defeat a new enemy that threatens humanity>> , "++said Anton Yudintsev++ , founder of Gaijin Entertainment . 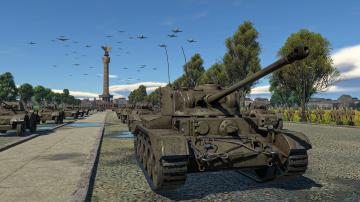