Gaijin Entertainment and Darkflow Software Studio announced the release of the "Wrath of heaven" update for the brutal online shooter Cuisine Royale. Now the heroes of the game are smashing enemies to shreds from the guns of armored vehicles, bombarding them with meteor showers and burning them with Molotov cocktails.

In the Arsenal of Cuisine Royale appears more and more legendary weapons-now added to the game infantry version of the Mosin rifle, German submachine gun MP 41 and rapid-fire American revolver Colt New Service M1909. The most striking novelty is the Molotov cocktail, an incendiary grenade from the second world war. It sprays a burning mixture that sticks to people, continuing to inflict damage even to those who managed to escape from the affected area.

For the first time, armored vehicles with weapons will be added to the list of vehicles available in Cuisine Royale. The Luftvärnsterrängdragbil M40 is an anti-aircraft self-propelled gun with a 40 mm automatic gun and 20 rounds of ammunition. Metropolitana is a combat reconnaissance vehicle with a 20 mm gun and 100 rounds of ammunition. You can only control weapons from the shooter's seat, so you need to play as a team to fire on the move. Armored vehicles will be rare on maps, but they can be easily detected at a distance with the help of special items of equipment --- for example, leopard underpants.

The mystical ritual of celestial wrath, after which the update is named, causes a deadly meteor shower to strike random areas inside the safe zone. Sign of the Shield creates a shelter is a great way to hide from the fire in an open area. The Molotov Cocktail trap throws an incendiary grenade at the enemy's feet. Finally, the second breath Ritual allows all players on the map to use the heroes ' unique superpowers without pausing between uses.

Detailed information about the changes can be found here on the official website of Cuisine Royale . 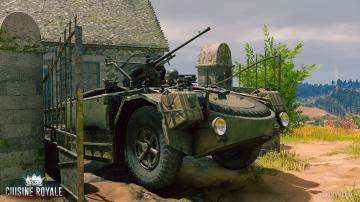