Codemasters introduced DIRT 5 --- a new generation of the famous rally racing simulator, which will premiere in the fall of 2020 on PC (Steam), PlayStation 4, Xbox One, as well as on a new generation of consoles (Xbox Series X and PlayStation 5). DIRT 5 is fully optimized for each of the platforms and is able to give virtual racers a new, adrenaline-filled driving experience, visual effects, a diverse soundtrack and dynamic weather changes.

The DIRT 5 journey will take you to the most picturesque places on the planet: from new York and Rio de Janeiro to Greece and China. Players will master extreme driving on various classes of cars - from buggies and powerful heavy SUVs to traditional modern rally cars.

The large-scale story career mode has become even bigger, thanks to new types of racing tests on super-complex off-road terrain. Before leaving for the start, experiment creatively in the livery editor, where now you will find more opportunities for customization than in any of the previous games in the series. 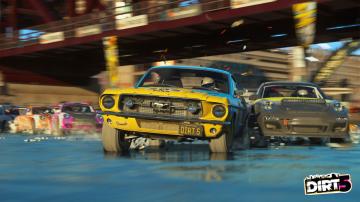