Modern humans began to edge out the Neanderthals in Europe earlier than previously thought, a new study shows.

Tests on remains from a cave in northern Bulgaria suggest Homo sapiens was there as early as 46,000 years ago.

This is up to 2,000 years older than evidence from Italy and the UK.

Around this time, Europe was populated by sparse groups of Neanderthals - a distinct type of human that vanished shortly after modern humans appeared on the scene.

There's considerable debate about the length of time that modern humans overlapped with Neanderthals in Europe and other parts of Eurasia.

This has implications for the nature of contact between the two groups - and perhaps clues to why Neanderthals went extinct.

A tooth and four bone fragments were identified as broadly human based on their anatomical features.

Helen Fewlass, from the Max Planck Institute for Evolutionary Anthropology in Leipzig, Germany, and colleagues determined their ages using scientific techniques. Their analysis, in Nature Ecology \& Evolution, says the remains yielded ages between 46,000 and 43,000 years ago, assigning them to a stage known as the Initial Upper Palaeolithic.

In the other paper, published in Nature journal, Jean-Jacques Hublin, also from the Max Planck Institute, and team members, detail features of the tooth that are found in modern humans but are absent from Neanderthals.

Furthermore, they were able to retrieve DNA from these remains, demonstrating that they belonged to Homo sapiens and not their evolutionary cousins.

Prof Chris Stringer, research leader for human evolution at the Natural History Museum in London, who was not involved with the latest study, said: "In my view, this is the oldest and strongest published evidence for an IUP (Initial Upper Palaeolithic) presence of H. sapiens in Europe, several millennia before the Neanderthals disappeared."

The bones were found associated with stone tools and artefacts, such as pendants made from cave bear teeth. Image copyright Tsenka Tsanova

These resemble examples found at later sites believed to have been occupied by Neanderthals.

This could suggest the two groups interacted sufficiently for modern humans to influence Neanderthal behaviour.

On this point, Prof Stringer explained: "That is certainly possible, although evidence suggests that Neanderthals were producing jewellery made from eagle talons and shells long before the IUP."

Dr Matt Pope, from the Institute of Archaeology at University College London, UK, and was not involved in either study, said: "If Neanderthals are living - as we tend to think from the genetic evidence - in relatively small dispersed groups of extended families, there may not be that need for complex social coding and symbolism.

"This for me is the exciting thing - Neanderthals may pick up these kinds of symbolisms as they become enmeshed and entangled in the social networks of contact that Homo sapiens will be carrying with them as they colonise Europe."

The upper date for the Bacho Kiro remains is older than previous evidence of early Homo sapiens settlement from Kents Cavern in Britain (a jawbone dating to between 44,200 and 41,500 years ago) and from the Italian site of Grotta del Cavallo (two teeth dating to 43,000-45,000 years ago and associated with artefacts belonging to the Uluzzian culture).

However, both the British and Italian evidence has been dated using material from the soil layers they were found in. The new paper relied on dating the bones and teeth themselves.

Prof Stringer said the Kents Cavern and Cavallo evidence was "not generally accepted because of uncertainties about their dating or morphology".

A scientific paper published in 2014 proposed that Neanderthals disappeared from Europe between 41,000 and 39,000 years ago with a 95% probability.

However, other scientists have found evidence that Neanderthals may have survived later in some areas.

At the least, the new finds suggest there was around 5,000 years of chronological overlap between Neanderthals and modern humans in Europe.

Dr Pope said there was "no sudden disappearance" of Neanderthals in Europe.

"The new dates, if they're correct, are pushing back the co-existence of Neanderthals and modern humans a couple of thousand years even further than the evidence from Kents Cavern and the Uluzzian dates," he explained.

"In some places, we're getting direct evidence for interbreeding events, which could be evidence of social networking and cohesion... but in other examples, we can still see evidence of clear Neanderthal morphologies, suggesting populations that aren't - to any degree - hybridising or being absorbed."

Prof Stringer said initial dispersals of modern humans into Europe may have been by small bands which could not sustain their presence in the face of a larger Neanderthal presence. Indeed, DNA evidence suggests some of these early settlers contributed minimally to the gene pools of later populations.

There is even earlier evidence of Homo sapiens in Europe. In 2019, researchers published evidence that a skull fragment from Apidima cave in Greece, dated to 210,000 years ago, belonged to Homo sapiens.

However, scientists say this very early foray into Europe was not permanent, and the Apidima Homo sapiens population was later replaced by Neanderthals. 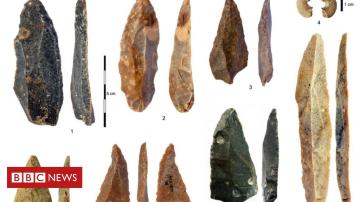