The "Raven Road" event has started in Crossout»

Gaijin Entertainment and Targem Games have announced the launch of the "Raven Road" event in the post-apocalyptic online action game Crossout. A new nomadic faction, the Crows, has arrived in the world of the game, which temporarily opens access to its technologies. In addition, a new KMZ armored car, armed with a minelayer and two machine guns, went on sale.

Previously, the roads of the wasteland were ruled by Knechts-knights-errant of the post-apocalyptic world. Another nomadic faction, the Crows, defeated the Knechts and took their place in the game. A Horde of formidable armored vehicles with bird symbols has arrived in the Valley, pitched tents and offers players to complete quests in exchange for access to unique weapons, equipment and cosmetic items. Raven quests will be available until may 27, after which you can only purchase items from this event in one way --- by purchasing from other players.

The KMZ armored car is available as part of the "Crossout --- Assault squad" set: Tango-1". Mines that it lays bounce when detonated, which increases the area of damage and allows you to hook low-flying objects. Complete with the car are all the necessary structural parts, cosmetic items and a portrait of the character "tango-1". 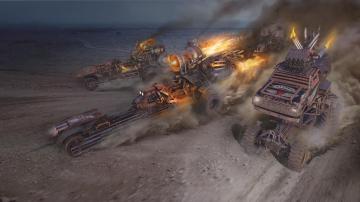