The collapse of demand and rising supply

Restrictive measures in connection with the coronavirus epidemic have brought down the demand for rental housing by at least half, say experts and market participants polled by Forbes. Compared to last year, the housing rental market has seen a 70% drop in demand, according to the Deputy Director of the rental Department of INCOM-real Estate, Oksana Polyakova. Similar figures are called by the head of the city real estate Department of the NDV Elena Mishchenko --- according to her, the demand for renting apartments has decreased "at times, by 50-60% exactly". Moreover, the situation began to deteriorate even before the introduction of self-isolation-demand for rental apartments in Moscow in March fell by 40%, according to data from analysts "Yandex.Real estate" provided by Forbes.

The apartments themselves, on the contrary, are becoming more. Since the last "pre-crisis" week of February, the market supply has increased by 25%, according to the head of the analytical center CIAN Alexey Popov. It is not so much the increased activity of landlords, but the growth of termination of lease agreements and replenishment of the market with objects that were previously rented out short-term, he explains. Oksana Polyakova from Incom agrees: "in the conditions of self-isolation in the capital's hiring market, the owners have taken a pause. The strategy of landlords is to wait out a difficult period, try to keep current tenants and keep prices for potential ones." But one way or another, CIAN records that during the months of quarantine in Moscow, there were about 36,000 new offers for renting real estate. According to Elena Mishchenko, now it is much easier to find or offer housing options. Some services, such as Avito and CIAN, have made it possible to place ads for free.

"In April, the cost of long-term hiring decreased slightly --- on average by 5%, renters are trying to keep prices down," says Oksana Polyakova from Incom. Online ad services record a stronger drop. CIAN and Avito-Real estate calculated that the average rental price decreased by 11% over a month and a half, according to Yandex.Real estate " speak about 15%. "Housing prices, real estate rentals for the year fell by 20% --- - says Elena Mishchenko from the NDV. --- What used to be rented for 40,000 rubles, now you can withdraw for 35,000 rubles. What cost 35,000 rubles has fallen to 28,000 rubles." However, in practice, prices are even lower, says Alexey Popov of the cian analytical center. Many tenants managed to agree with the apartment owners to reduce the rent by 15-25% for the period of quarantine or even "until the return to pre-crisis reality". 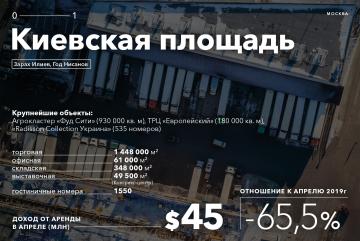