Sony and Insomniac Games published a video with the analysis of the trailer Marvel's Spider-Man: Miles Morales . In addition, the creative project Manager ++Brian Horton++ (Brian Horton) shared details about the game in PlayStation blog .

Action Miles Morales it takes place in the winter, about a year after the events of the first game. Just before Christmas break, a war breaks out in new York between an energy Corporation and a high-tech army of criminals. Harlem, miles Morales ' new home, is caught between a rock and a hard place.

Development of the game started immediately after the first production was completed Marvel's Spider-Man . ++Horton++ promises a full-fledged story game, comparable in scale to Uncharted: The Lost Legacy . The set will include new story and action scenes, villains and quests.

Miles Morales it will demonstrate the advantages of the PlayStation 5 --- "almost instant" downloads, 3D audio, retrace and new features of the dualsense gamepad. Plus everything Insomniac improved character models, made their hair more realistic, and updated the assets of virtual new York.

The creators made sure that miles did not seem like a copy of Peter Parker --- the young Spider moves and fights differently. The newcomer had new abilities such as invisibility and bio-electricity.

Finally, ++Horton++ he assured me that Peter's story was not yet complete. However, the upcoming game is entirely dedicated to miles.

Marvel's Spider-Man: Miles Morales released on PlayStation 5 at the end of the year. 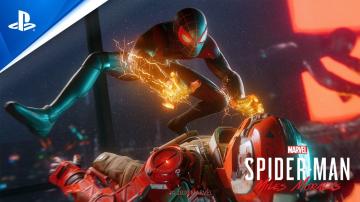